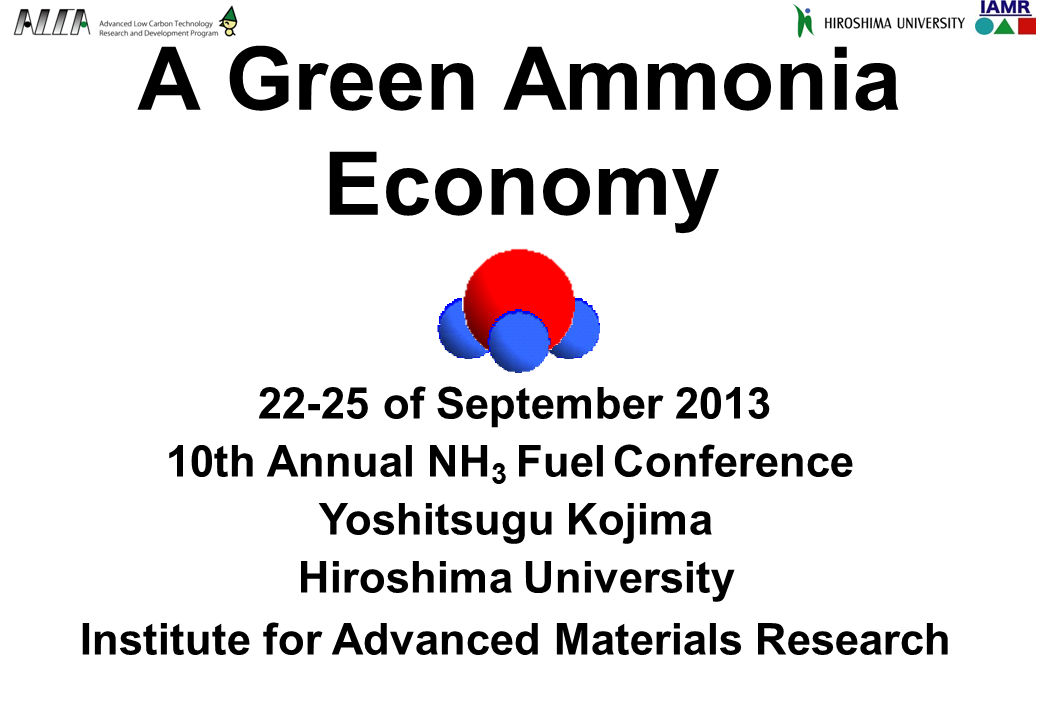 Ammonia has a high volumetric hydrogen density of 107.3 kg H2 per cubic meter, because it is easily liquefied by compression below 0.86 MPa at 20° C. The vapor pressure of liquefied ammonia is similar to propane. Moreover it has a high gravimetric hydrogen density of 17.8 mass% compared with the solid state hydrogen storage materials. It is noteworthy that ammonia can be synthesized from hydrogen in large scale manufacturing by Haber–Bosch process at 400-600° C and 20-40 MPa. Therefore, liquid ammonia is one of the most promising methods for storing and transporting hydrogen.

CO2 free hydrogen (ammonia) will be synthesized using solar cell, solar heat, and wind power from water and nitrogen by means of thermochemical and electrochemical methods. Thermochemical water-splitting by IS (iodine, sulfur) process and sodium redox reactions will be a future hydrogen production method. Hydrogen is converted into ammonia by Haber–Bosch process. We call this “Power to Liquid” which converts renewable energies to liquid fuel. A small-scale ammonia synthesis process to store and transport various renewable energies will be also developed. Ammonia can be stored and transported as a liquid because ammonia distribution infrastructure already exists in the world.

When ammonia combusts, it produces nitrogen and water vapor (4NH3 + 3O2 → 2N2 + 6H2O). Ammonia can be used in internal combustion engines, gas turbines, and solid oxide fuel cells (SOFC) as an energy carrier. Several of the car manufacturers have announced plans to introduce a production model of a PEM fuel cell vehicle in 2015. Ammonia will be used as a hydrogen carrier and applied for the fuel cell vehicle with high energy efficiency of 60% (4NH3 → 2N2 + 6H2, 6H2 + 3O2 → 6H2O). Current PEM fuel cells are poisoned by trace levels (>0.1ppm) of ammonia. After hydrogen generation by ammonia cracking, ammonia absorption materials will be useful to produce the high purity hydrogen gas.