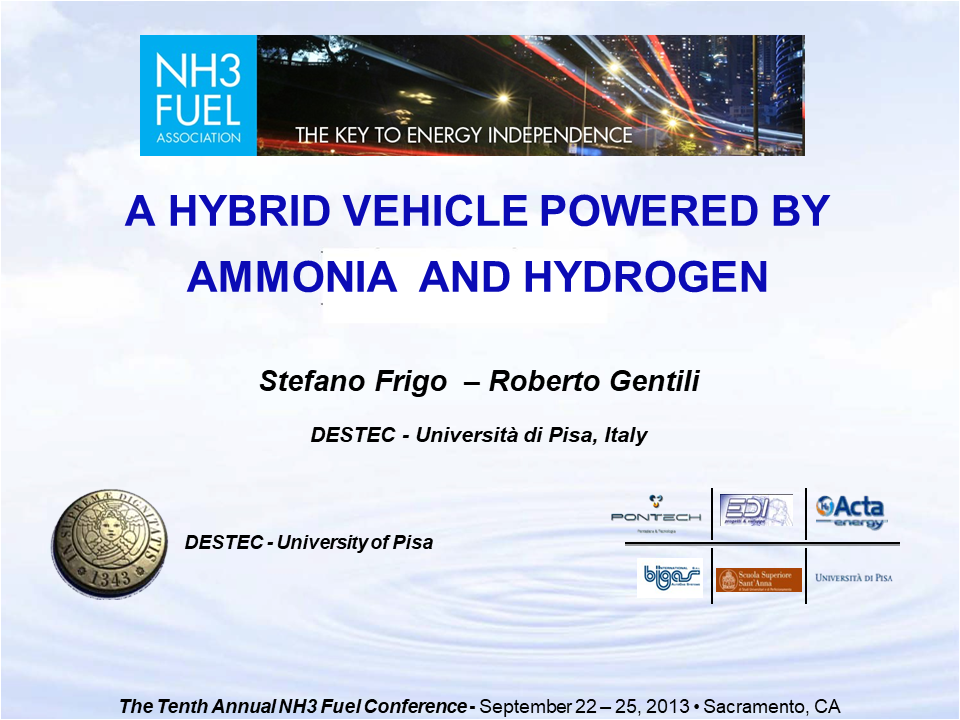 A partnership of Research and Industry entities has developed a fully working hybrid electric vehicle equipped with a 15 kW IC engine fuelled with liquid ammonia as a range extender of the lithium batteries pack on board. The entire vehicle powertrain (ie, the IC engine, the electric generator coupled with the engine, the electric motor, the electronics etc.) has been studied and designed.

Regarding the IC engine, as is known, ammonia combustion is characterized by a high activation energy and a low flame velocity, therefore a small amount of hydrogen is requested as igniter and combustion promoter. The necessary amount of hydrogen is coming from the thermal decomposition of the same ammonia by cracking it at approximately 400°C inside a special catalyst (purposely realized within the project) heated by the engine exhaust gasses. The Nitrogen and Hydrogen mixture coming from the cracker is introduced, by an indirect injection, into the intake manifold together with the ammonia. Ammonia is stored on board inside a tank very similar to the LPG gas tanks, being ammonia maintained in a liquid state at approximately 0.9 MPa. The pipelines had to be resistant to the chemical aggression of ammonia and special part had been used. The combustion of ammonia has as reaction products only water and nitrogen oxides, being these last ones easily removable by means of a catalytic system (SCR) helped by the presence of ammonia.

A first campaign of engine testing has been carried out giving great results, considering that an optimization phase has to come, confirming that the amount of hydrogen produced by the catalyst (roughly 1.3 m3/h) is enough for a satisfactory engine running. Road tests for the entire vehicle are actually on course. However, the use of ammonia for the propulsion of motor vehicles introduces some issues on safety, because of the chemical-physical characteristics of the substance. Ammonia is moreover a toxic gas whose ways of penetration in the human organism can be: inhalation, ingestion and contact. This is why a complete work package of the project has been given to safety, building up a sensors system in order to detect presence of ammonia in the locale of the engine and in the exhaust system.

This kind of vehicle for transport, with series hybrid propulsion (vehicle electrical worker fed from batteries charged by an ammonia generator), would also make ZEVs (“Zero Emission Vehicles”) and stationary generation devices fuelled with ammonia interesting for the storage of energy from renewable sources (wind, photovoltaic, etc) which actually use grid as storage system.