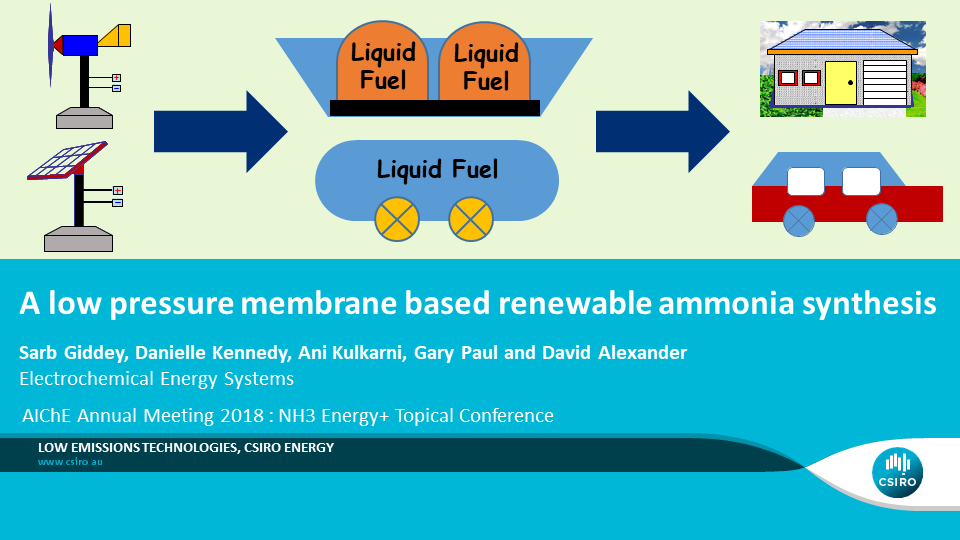 Ammonia is currently mostly produced by the highly energy and carbon-intensive Haber–Bosch process, which requires temperatures of 450–500 °C and pressures of up to 200 bar. The feedstock for this process is hydrogen from natural gas (NG), coal or oil, and nitrogen produced from air by cryogenic route or pressure swing adsorption (PSA). The share of NG, coal and fuel oil feedstock for the global production of ammonia is 72%, 22% and 4% respectively, contributing to approximately 420 million tons of CO2 emissions per annum, representing over 1% of global energy related emissions. The energy consumed for ammonia synthesis by Haber-Bosch process is in the 10 to 15 MWh/tonne range, depending on the type of fossil fuel feedstock used.

In an alternative route renewable hydrogen produced by an electrolyser can be fed to the Haber-Bosch reactor along with nitrogen for ammonia synthesis, and this route has been suggested to consume energy around 12 MWh/tonne of ammonia.

CSIRO has developed a metal membrane based ammonia synthesis process that uses hydrogen and nitrogen as feedstock. The materials and catalyst developed for the process allow the synthesis process at much lower pressures (~ 10 bar) at 450 °C. The synthesis rates achieved are two orders of magnitude higher than with any electrochemical route. The catalyst and the metal / catalyst interfacial structure have been specifically tailored for low pressure ammonia synthesis. The low pressure membrane reactor allows direct coupling to an electrolyser and air separation unit (ASU) operated by a renewable source, thus promising over 25% reduction in the energy input, substantial capital savings on reactors compared to conventional Haber-Bosch process, and allows distributed or centralised ammonia production.

This presentation will provide details and current status of the technology in terms of the catalyst and interfacial structures developed, and the reactor design to achieve high ammonia synthesis and conversion rates. The presentation will also discuss the merits of this technology compared to the conventional and other emerging routes.