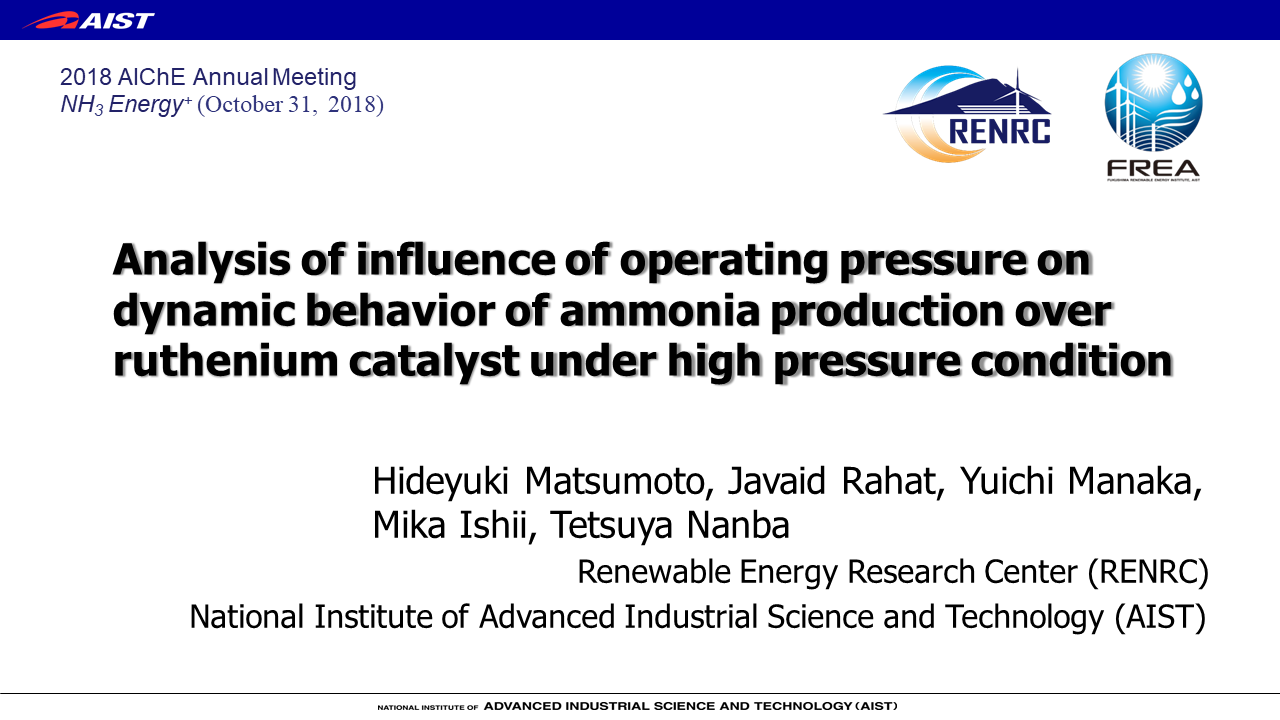 Process technologies on energy conversion of renewable electricity into hydrogen energy carrier are significant to deploy long-term storage and long-distance transport of much more renewable inside and outside Japan. Ammonia is a potential hydrogen carrier that contains 17.6 wt% of hydrogen. Moreover, as an energy carrier, ammonia is thought to be a clean fuel as only water and nitrogen are produced on direct combustion.

Many researchers and engineers consider that ammonia plants using hydrogen produced by solar electricity or wind electricity will be much smaller than those currently used [1]. There is an issue of low pressure condition for feed of raw material gas, since hydrogen and nitrogen are produced by water electrolysis and pressure swing adsorption (or cryogenic air separation) respectively. Ammonia synthesis under the conventional pressure conditions needs increase in power for compression of the feed gas. Moreover, low temperature operation has advantage in getting higher ammonia concentration of equilibrium limitation. In order to promote the reaction under the lower pressure conditions, lower reaction temperature condition is desirable due to a limitation of equilibrium.

In Japan, the Japan Science and Technology Agency (JST) supports the research and development of catalyst with high catalytic activities in the low-temperature region, and our research group investigates performance of developed ruthenium catalysts by small-scale ammonia plant that is built in Fukushima Renewable Energy Institute, AIST (FREA).

Ruthenium (Ru) catalysts have received particular attention owing higher activity for ammonia synthesis, since the pioneering study of Aika et al. [2] Great efforts have been paid to develop supported Ru catalysts using various metal supports that are Al2O3, MgO, Cs-MgO and so on. However, there is a small number of studies for influence of time-variation of flow rate of hydrogen and operating pressure to kinetics of ammonia synthesis by using the Ru catalysts supported on metal oxides, from the viewpoint of design of the small-scale ammonia production systems by using renewable energy.

Laboratory kinetic experiments for the developed Ru catalyst was carried out by using a quartz tubular reactor (φ14 mm x 370 mm). The catalyst of about 2 milliliters was packed in the middle. As the preliminary step to activate the catalyst, hydrogen and nitrogen was flowed in a stoichiometry ratio for 30 minutes under condition of 600 ºC and ambient pressure. In the present study, ammonia synthesis was carried out by changing flow ratio of hydrogen to nitrogen (γ) in a range of 0.25 – 4.0, temperature in a range of 325 – 425 °C, gage pressure (P) in a range of 0.0 – 10 MPa. The produced ammonia was analyzed by the decrease of electron conductivity in the sulfuric acid solution.

First, data of STY for ammonia production by using Ru-Cs/MgO under low pressure conditions (< 2.5 MPa) were analyzed by the Temkin equation model that was well-known, which could be derived under the assumption that the reaction rate-determining step (RDS) was dissociative adsorption of nitrogen. In the present paper, we apply plots for relationships between the factor of adsorption term (denominator of LHHW equation) and the ratio of driving force (numerator of LHHW equation) to rate of ammonia production [3], in order to investigate applicability of numerical formula of kinetic model that is changed by assumption for the RDS and competitive adsorption of intermediates on the active site. When temperature was 400 ºC, plots for various flow ratio γ showed tendency of linear increase with value of (pA / pH1.5) that was changed by operating pressure, which indicated applicability of the Temkin equation model. However, in a case when T = 325 ºC, a tendency of plots that was different from 400 ºC was seen. Since value of (pA / pH1.5) decrease with increase in operating pressure, it was considered that a massive surface coverage with adsorbed hydrogen inhibiting the catalytic activity was induced by increasing pressure. Then, it was considered that the interaction between hydrogen and Ru and or Cs on the surface of the catalyst become stronger at 325 °C.

Next, data of STY for ammonia production by using Ru/CeO2 under high pressure conditions (<10 MPa) were analyzed by using the power law expression (r = k pN2l pH2m pNH3n). In this kinetic analysis, the exponent of partial pressure for hydrogen (m) was positive. Then, the exponent of partial pressure for nitrogen (l) was 0.37 smaller than 1. According to the previous paper [4] for kinetic analysis for Ru-Cs/MgO, the l’s value of 1 can be derived from the Temkin model. Since it is supposed that formula of the LHHW equation model for Ru/CeO2 may be different from the Temkin equation model, we investigate application of other kinetic model based on the assumption of competitive adsorption of hydrogen radical and nitrogen hydride radicals on the active site, by using the above-mentioned analytical plots for relationships between the factor of adsorption term and the ratio of driving force to rate of ammonia production.

When data of STY for a case when T = 400 °C and γ = 3 were analyzed by the analytical formula based on the Temkin model, tendency of plots with negative slope in a region of high pressure (P > 4 MPa) showed that conventional assumption of competitive adsorption of hydrogen radical and nitrogen radical on the active site was not applicable to interpretation of reaction behavior on Ru/CeO2 catalyst. On the other hand, LHHW equation model based on the assumption of competitive adsorption of hydrogen radical and NH2 radical on the active site showed useful for the kinetic analysis, due to tendency of linear increase with value of (pA / pH0.5) that was changed by operating pressure. Therefore, it was considered that competitive adsorption of hydrogen radical and nitrogen hydride radicals was a key factor for retardation of progress of ammonia production by using Ru/CeO2. In future work, influence of adsorption nitrogen hydride radicals under high pressure condition will be analyzed by data of STY that were collected by changing the flow ratio of hydrogen to nitrogen.
This work was supported by Council for Science, Technology and Innovation (CSTI), Cross-ministerial Strategic Innovation Promotion Program (SIP), “Energy carriers” (funding agency: Japan Science and Technology Agency, JST).