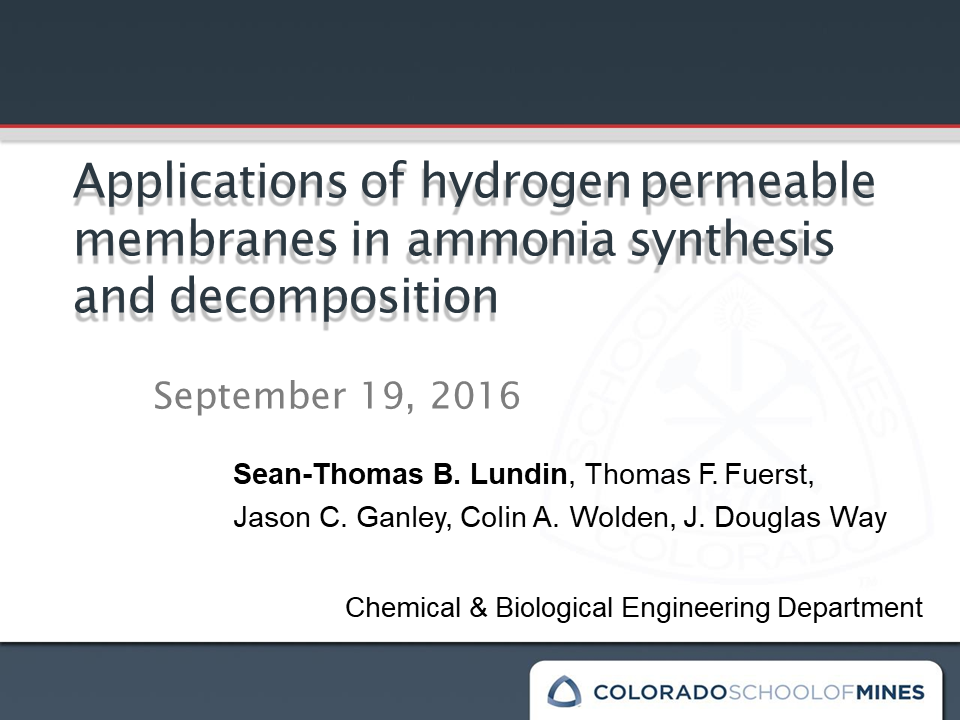 It is well known that ammonia is being considered as a method of storing hydrogen. Although some fuel cells are being developed that can use ammonia directly as a fuel source, many fuel cell technologies still require an outside cracker to revert ammonia back into hydrogen for efficient use. In this regard, hydrogen permeable membranes, such as Pd and its alloys, have been targeted as potential membrane reactors in which the ammonia is cracked while the hydrogen is simultaneously separated. Pd and its alloys are expensive, but offer potentially perfect hydrogen purity that is highly preferable for certain fuel cells susceptible to ammonia poisoning. Yet, cheaper metals, such as V, Nb and Ta, may offer a more affordable alternative while maintaining perfect hydrogen selectivity. The first part of this talk will involve our work on ammonia decomposition using both Pd-based membranes and the cheaper V, Ta or Nb metals.

After discussing the propensity of hydrogen permeable membranes to act as separators for ammonia cracking and pure hydrogen production, a newer concept of ammonia synthesis will be discussed. Over the last several decades, Pd membranes have been studied in hydrogenation reactors with the hope of utilizing the permeating hydrogen for the preferential partial hydrogenation of some hydrocarbons. Yet, the concept of using these membranes for ammonia synthesis has not fully been explored. By drawing motivation from electrochemical cells and recent DFT studies on the possible metal catalysts, a new concept for ammonia synthesis will be described using a hydrogen permeable membrane with a novel surface catalyst coating. It is a combination of the modified surface catalyst and the highly reactive permeating hydrogen that allows ammonia to be formed at low pressures and moderate temperatures. Using this concept, we have measured NH3 synthesis rates as high as 6 × 10-9 mol cm-2 s-1 in preliminary experiments at 500 °C and 0.8 bar. These rates are competitive with analogous experiments using ceramic proton conducting membranes.