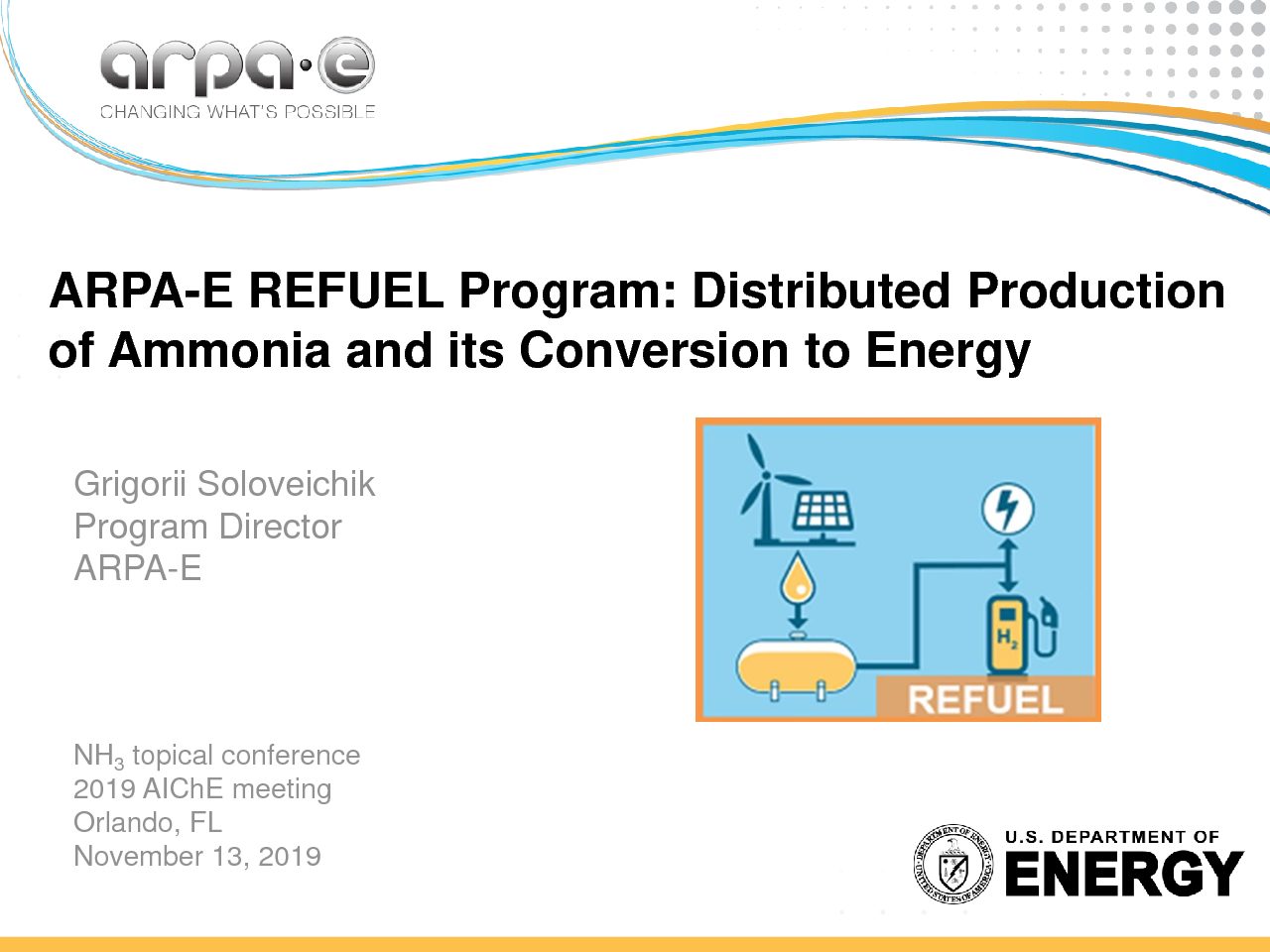 Ammonia, which has high energy density in easily produced liquid form and can be converted to electric or motive power, is considered to be an almost ideal non-carbon energy vector in addition to its common use as a fertilizer. It can be manufactured anywhere using the Haber-Bosch process, effectively stored, transported and used in combustion engines and fuel cells as well as a hydrogen carrier. Transition from fossil fuels as the energy source and feedstock to intermittent renewable energy sources will require a shift from large scale Haber-Bosch plants (1,000 – 1,500 t/day) to distributed ammonia production matching electrical power input from smaller scale wind and solar farms. From the other side, the use of ammonia for energy storage and delivery needs new efficient technologies for its conversion to electricity or hydrogen as an intermediate fuel. To solve these problems, the Advanced Research Projects Agency (ARPA-E), which invests in transformational, high risk early stage research, in 2016 initiated the Renewable Electricity to Fuels through Utilization of Energy-dense Liquids (REFUEL) program.

The REFUEL program funds projects in two categories: production of ammonia and other energy-dense zero-carbon liquid fuels using variable electricity and direct conversion of ammonia to electricity in fuel cells or cracking to hydrogen. Technologies for distributed ammonia production with low capital and operational costs include improving conventional Haber-Bosch process via reduction of operational pressure and temperature, plasma enhanced synthesis and direct electrochemical synthesis. In addition, advanced ammonia separation methods applicable to all these processes are being developed. The Haber-Bosch process improvement is definitely an achievable goal, due to the relatively advanced development stage of both water electrolysis and ammonia synthesis steps. To be competitive with conventional process, the direct electrochemical process should demonstrate efficiency >86% and reaction rate at least 7×10-7 mol cm-2 s-1, which is equivalent to current density > 300 mA cm-2 at 90% coulombic efficiency. This is extremely challenging goal to reach in 3 years.

The REFUEL program funds projects on direct ammonia fuel cells with different electrolytes: AEM, oxygen and proton solid oxides with different operation temperatures, and hydrogen delivery from ammonia using membrane and electrochemical separation technologies. Major focus in these projects is on development of novel catalysts and membranes with high flux and selectivity. In this presentation a review of related cohorted projects on ammonia technologies supported by REFUEL and from OPEN and IDEAS programs will be made. The most successful projects will be highlighted and compared with the-state-of-the-art, and current trends in ammonia energy will be analyzed.