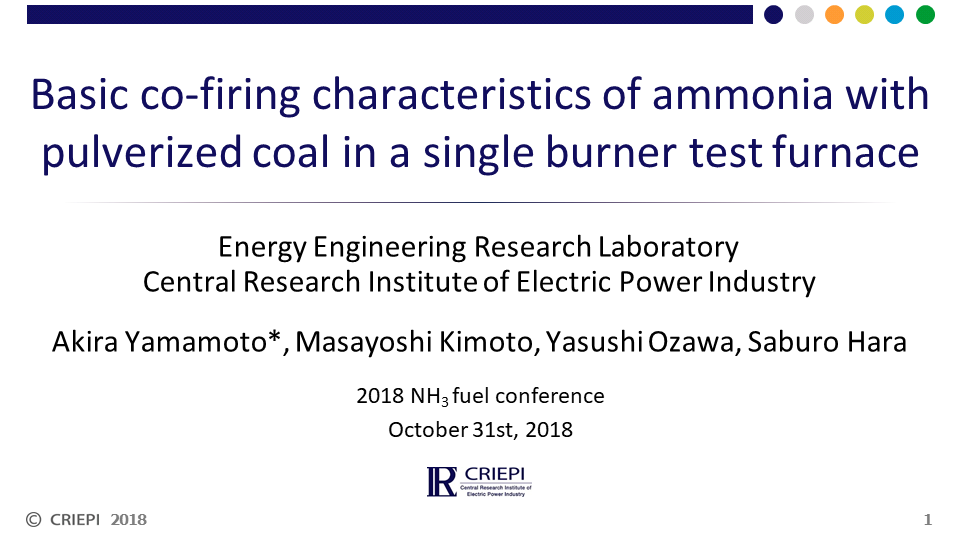 Ammonia is expected as a potential fuel to substitute fossil fuels, because it does not discharge carbon dioxide and is easily handled by liquefaction. There are several ways for the direct use of ammonia as a fuel; for example, use in fuel cells and combustion devices. One of the possible application is the combustion use in thermal power plants. In particular, co-firing of ammonia in coal-fired power plants seems to have a relatively great advantage on the suppression of greenhouse gases, because coal is one of the main emission source of carbon dioxide. On the other hand, it is concerned that concentration of nitrogen oxides (NOx), which is one of the typical atmospheric pollutant, in the flue gas would considerably increase due to the oxidation of ammonia. To utilize ammonia as a co-firing fuel in existing pulverized coal-fired power plant, without causing additional costs for the modification of the denitration equipment, it is important to develop a combustion technology that can suppress the NOx concentration in the flue gas. Co-firing characteristics of pulverized coal and ammonia, however, had not been evaluated except in the case of very low co-firing rate for the purpose of denitration in the pulverized coal flame. In this study, basic co-firing characteristics of pulverized coal and ammonia were investigated using a bench-scale single burner test furnace.

A schematic diagram of the single burner test furnace is shown in Fig. 1. The rated thermal input of the furnace is 760 kW, which corresponds to approximately 100 kg/h of coal for common bituminous coals. The total air ratio (the inverse of the equivalence ratio) is 1.24, in which the oxygen concentration at the furnace exit is 4%. In addition, two-stage combustion is employed to reduce NOx emission by creating a reducing environment, and the staged air was fed from the ports located at a distance of 3.0 m from the burner. The rate of staged air is 30% of the total air flow. Ammonia was fed into the furnace in two different ways; one is the injection into the center of the pulverized coal burner, and the other is separate injection through the side port of the furnace wall.

This research was supported by a program of Energy Carrier in Strategic Innovation Promotion Program (SIP), led by Japan Science and Technology Agency (JST). We appreciate the support from all concerned.