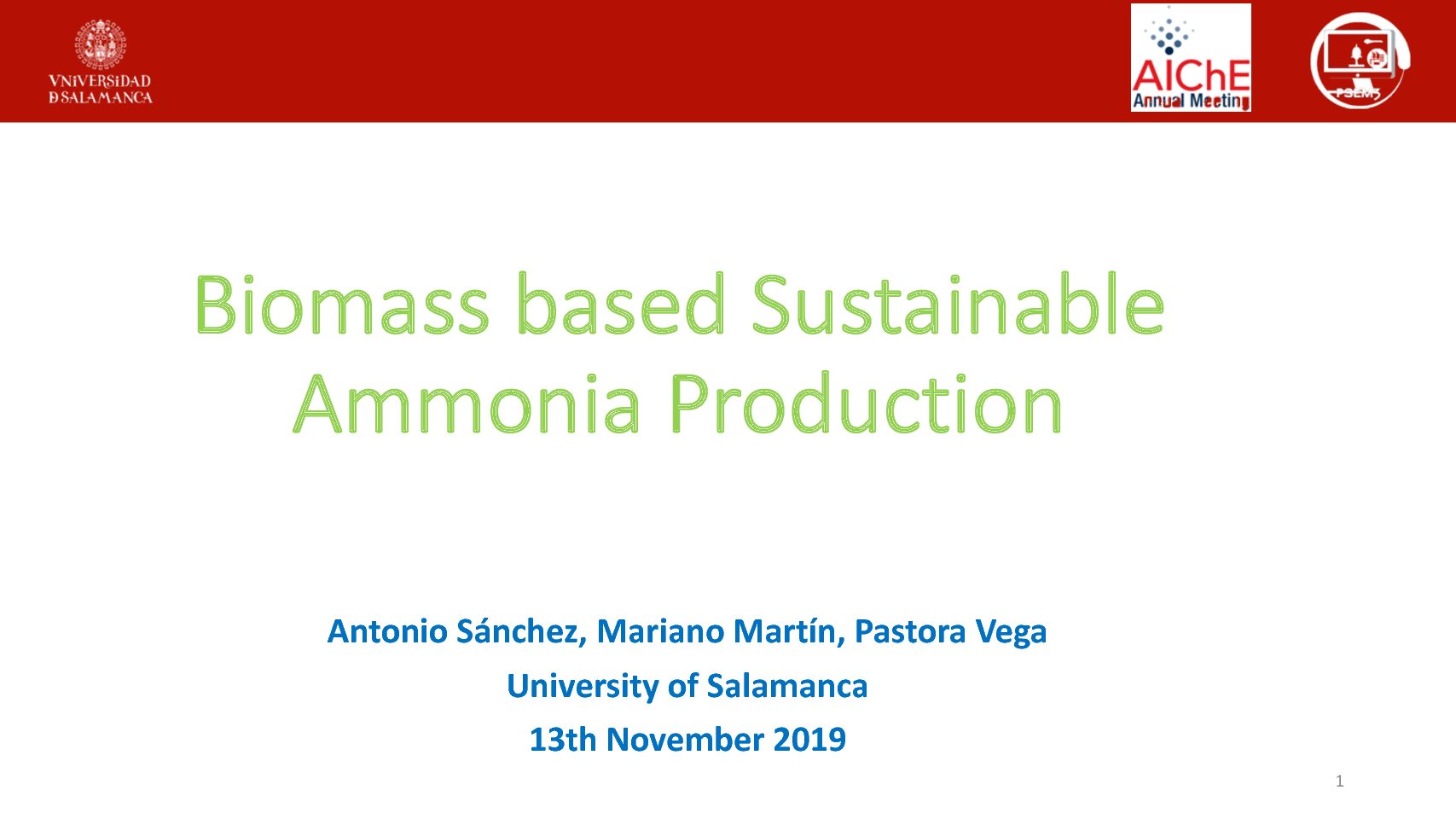 The renewable ammonia production is gaining attention nowadays. Current production processes use as raw material, predominantly, natural gas or coal. Therefore, large amounts of greenhouse carbon dioxide are released in the production process. Different alternatives for a sustainable path to produce ammonia have been analysed. One alternative is producing hydrogen through electrolysis, nitrogen by air separation and then produce ammonia via Haber Bosch process (Sánchez & Martín, 2018). An interesting feature of this process is the possibility of integrating renewable energy sources in the ammonia production. Another technology is the electrochemical ammonia production (Bicer & Dincer, 2017). The ammonia synthesis takes place in an electrolytic cell using as raw material nitrogen and hydrogen (or directly water). This method allows a better integration of the fluctuating renewables energies in the process but it is still under development. Finally, biomass can be used as feedstock to produce ammonia. Two main processes have been proposed to transform biomass into ammonia: biomass digestion and biomass gasification. Some authors present biomass gasification as a competitive alternative in economic and environmental terms (Demirhan et al., 2018; Tock et al., 2015).

In this work, a systematic methodology to optimize the biomass to ammonia process and to evaluate its economics and environmental performance is presented. Switchgrass is selected as raw material due to its large potential as a bioenergy crop. The biomass is treated following two paths: gasification and anaerobic digestion. Three gasification alternatives have been considered: indirect gasification, direct gasification with oxygen and steam and direct gasification with air and steam. Two different reforming alternatives have been studied: autothermal reforming and steam methane reforming. Finally, two different ammonia configurations have been presented: direct cooling and indirect cooling multibed reactors. Different approaches to the modelling issue have been employed: first principles, equilibrium conditions, surrogate models, industrial data, etc. The objective function consists of a simplified evaluation of the profit. The entire problem is decomposed and formulated in GAMS as a set of NLP’s for each major alternative where the decision variables are the operating conditions of the gasifiers, the synthesis reactors, etc.

The results show that the most promising alternative to produce ammonia from biomass consists of the combination of indirect gasification with steam methane reforming and direct cooling ammonia reactor. This technology presents an investment of about 316 MM€ and a production cost of 380€ per ton of ammonia. The gasifier processes present better economic results than the digestion ones due to the larger yield to product from the biomass while the digestion generates a large amount of unconverted digestate that it is not transformed into ammonia. The environmental index shows a release of the carbon dioxide associated with the process to be about 1 kg CO2 per kg of ammonia, approximately one fourth of the current values. Finally, a sensitivity analysis based on the switchgrass price and a scaling study for the plant is also presented.