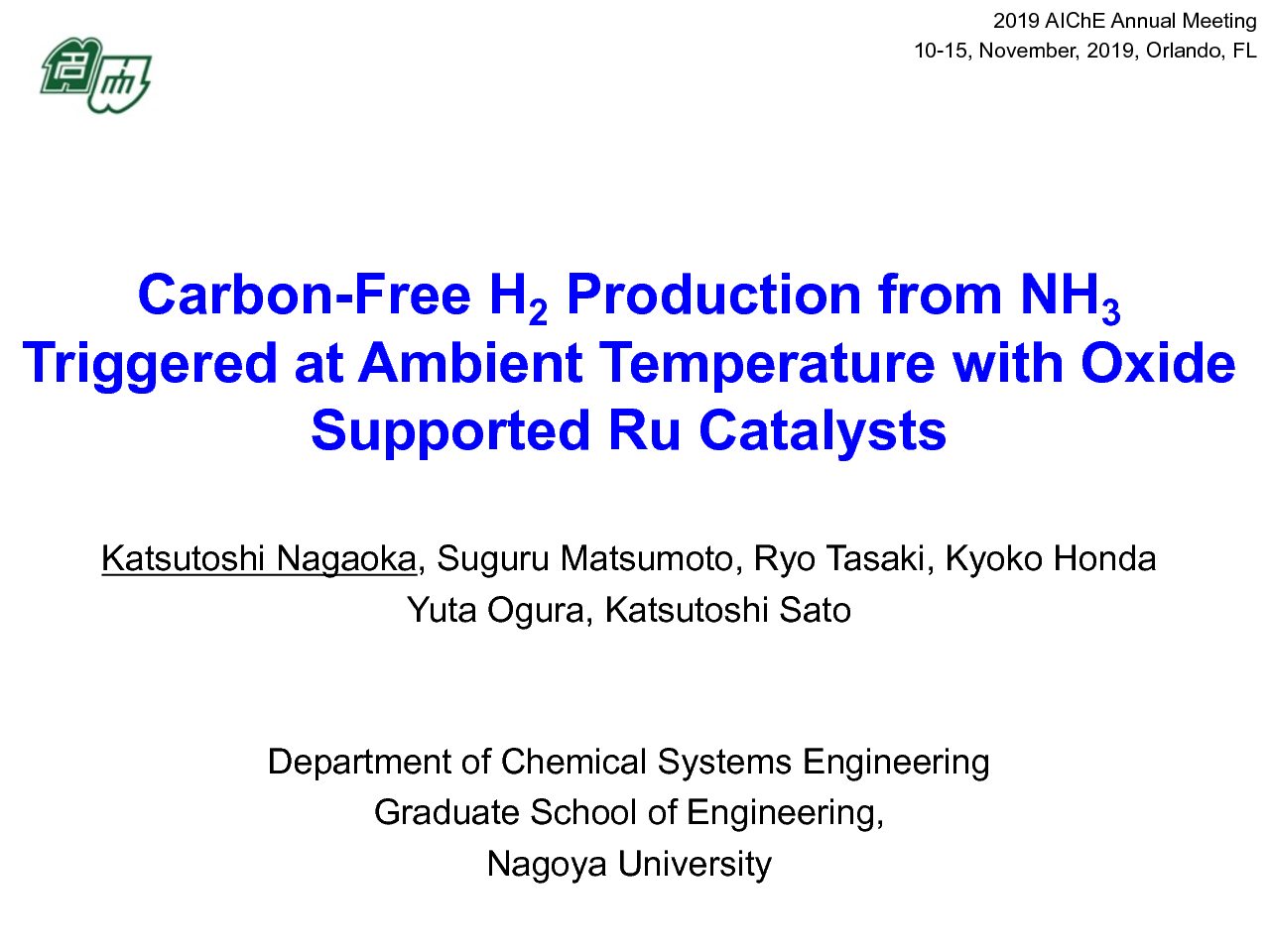 Hydrogen produced from renewable energy has received a lot of attentions as a clean energy and development of a hydrogen storage and transportation system using hydrogen carrier has been greatly demanded. Among different kinds of hydrogen carrier, NH3 is regarded as one of the promising candidates, due to high energy density, high hydrogen capacity, and ease of liquification at room temperature. Furthermore, a carbon-free hydrogen storage and transportation system could be realized by using NH3 as hydrogen carrier. In this system, hydrogen produced from NH3 is used in engines, fuel cells, and turbines. However, use of NH3 as a hydrogen carrier, peculiarly for transportable devices and household, has been limited due to lack of an efficient process for producing hydrogen from NH3.

We also succeeded in construction of cyclic process where NH3 oxidative decomposition is triggered repeatedly without pre-treatment from 2nd to 5th cycle.

After the pre-treatment shown in the section of results and discussion, acitivty tests were carried out under quasi-adiabatic conditions. An NH3/O2/He (NH3/O2/He ratio, 150:37.5:20.8 ml min−1;GHSV, 62.5 Lh−1g−1) gas mixture was then fed at room temperature to the catalyst. We set the gas composition by assuming the Eq. 1. The composition of the exit gas was monitored with a quadrupole mass spectrometer and analyzed with a thermal conductivity detector after 30 min.

At first, theRuO2/γ-Al2O3 catalyst was treated in He at 300°C to remove adsorbate and create NH3 adsorption site and then the catalyst was cooled to ambient temperature. After supplying the NH3/O2/He mixture, H2 production rate increased suddenly to more than 30 Lh−1g−1 within 0.5 min and catalyst bed temperature rose to 522 oC at the same time1. After the reaction for 30 min, O2 was consumed completely: NH3 conversion was 93% and H2 yield was near the maximum value, 67 %. These results demonstrate that NH3 oxidative decomposition was triggered in a very short time without any external heat input and proceeds spontaneously. After 35 min, the reaction was terminated by substitution of He for the NH3/O2/He mixture, and the catalyst was cooled to ambient temperature. Then, O2 was supplied over the catalyst to oxidize the Ru metal formed during the reaction, and an NH3/O2/He mixture was fed to the catalyst. This purge-feed sequence was repeated for three more times. For all cycles, the NH3 oxidative decomposition was repeatedly triggered at ambient temperature, and high H2 yields as well as high NH3 and O2 conversions were maintained for all cycles. After the second cycle, ammonia was desorbed in situ (regeneration of NH3 adsorption sites) during the reaction.

Our results revealed that self-heating of the catalyst bed from ambient temperature is used as a trigger for the NH3 oxidative decomposition. To heat the catalyst to the catalytic auto-ignition temperature, we successfully used the heat generated by NH3 adsorption onto RuO2/γ-Al2O3 or oxidation of reduced Ru/Ce0.5Zr0.5O2. This study demonstrates the concept of self-heating of catalysts, which is a novel strategy for the cold-start process for H2 production from NH3.