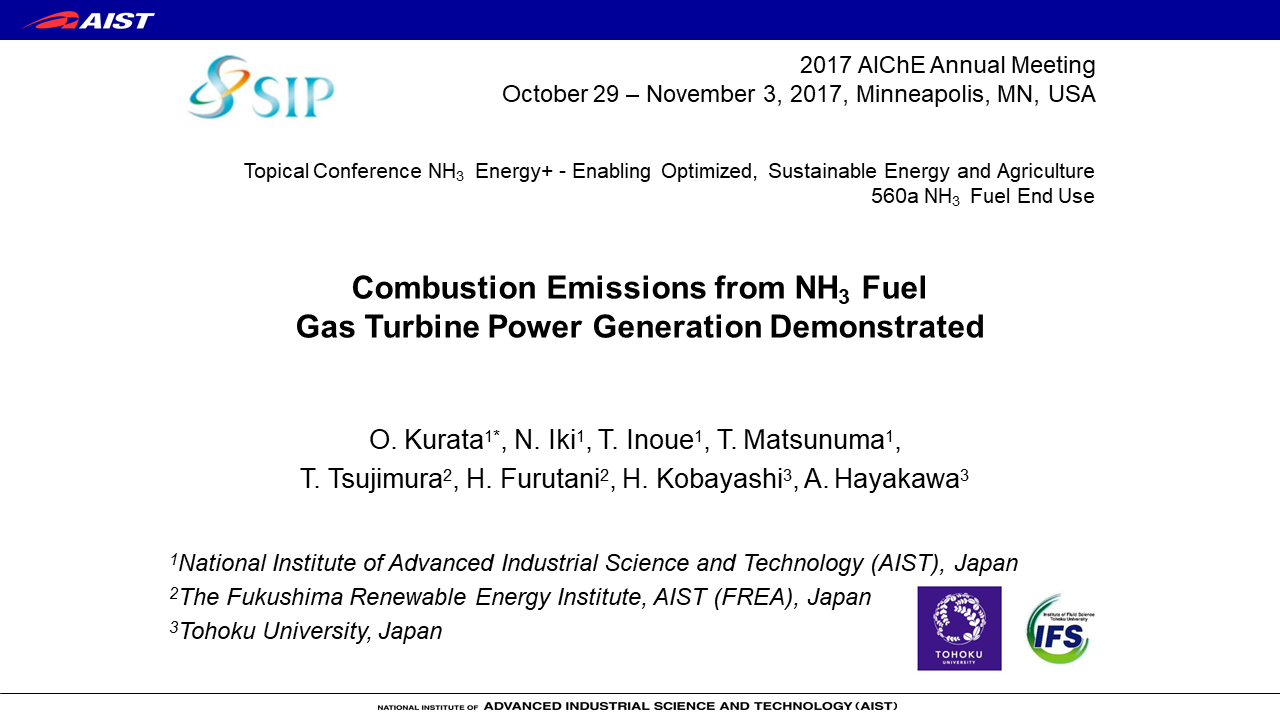 To protect against global warming, a massive influx of renewable energy is expected. Although H2 is a renewable media, its storage and transportation in large quantity is difficult. NH3 fuel, however, is an H2 energy carrier and carbon-free fuel, and its storage and transportation technology is already established. Although NH3 fuel combustion was studied in the 1960s in the USA, the development of an NH3 fuel gas turbine had been abandoned because combustion efficiency was unacceptably low [1]. Recent demand for H2 energy carrier revives the usage of NH3 fuel, but no one has attempted an actual design setup for NH3 fuel gas turbine power generation. The National Institute of Advanced Industrial Science and Technology (AIST) in Japan collaborated with Tohoku University successfully performed NH3-kerosene gas turbine power generation in 2014, and NH3 fuel gas turbine power generation in 2015 [2].

The facility consists of an NH3 fuel-supply system, NH3 gas compressor, 50 kW-class micro gas turbine, Selective Catalytic Reduction (SCR) NOx-reduction apparatus, and loading equipment. The micro gas turbine utilizes a diffusion combustor to stabilize flame and a recuperative heat exchanger to improve the thermal efficiency of the gas turbine cycle. Because the laminar burning velocity of NH3/air is one-fifth that of CH4/air combustion intensity of NH3/air is very low. In addition, NH3 has been thought of as a fuel N additive in the study of NOx formation. Although NOx reduction in the combustion process is desirable, low NOx combustion technology is difficult because NH3 had been thought of as a source of fuel-NO. Hence, to evaluate the performance of NH3 fuel gas turbine power generation it is important to pay attention to combustion stability and combustion emissions.

We report in the previous study about combustion emission characteristics of NH3 fuel gas turbine that in the case of NH3/air, concentrations of NO and unburnt NH3 strongly depend on combustor inlet temperature, and that in the case of NH3/CH4/air, concentration of NO at constant electric power output depends NH3 ratio in the mixture [3]. This report additionally shows that other than NO, combustion emissions of NO2 and N2O considerably decrease at high electric power output. Meanwhile, these results come from the restriction of the eigen balance of fuel, air, and heat because compressor and turbine are connected with a single shaft in the gas turbine. Next step element test using combustor test rig was performed to develop low NOx combustor. It is difficult to characterize combustion emissions with the former parameters because in the case of combustor test rig, there is no restriction of the quantity of fuel, air, and combustor inlet temperature. Thus this paper reports combustion emissions of NH3 fuel gas turbine re-characterized with the other parameters, such as fuel flow rate, air flow rate, overall equivalence ratio, NH3 ratio, combustor inlet pressure, and combustion temperature.

Acknowledgments:
This work was supported by the Council for Science, Technology and Innovation (CSTI), the Cross-ministerial Strategic Innovation Promotion Program (SIP), “Energy Carriers” (Funding agency: Japan Science and Technology Agency (JST)). The authors also thank “Toyota Turbine and Systems Inc.” for the advice on the operation of the micro gas turbine.