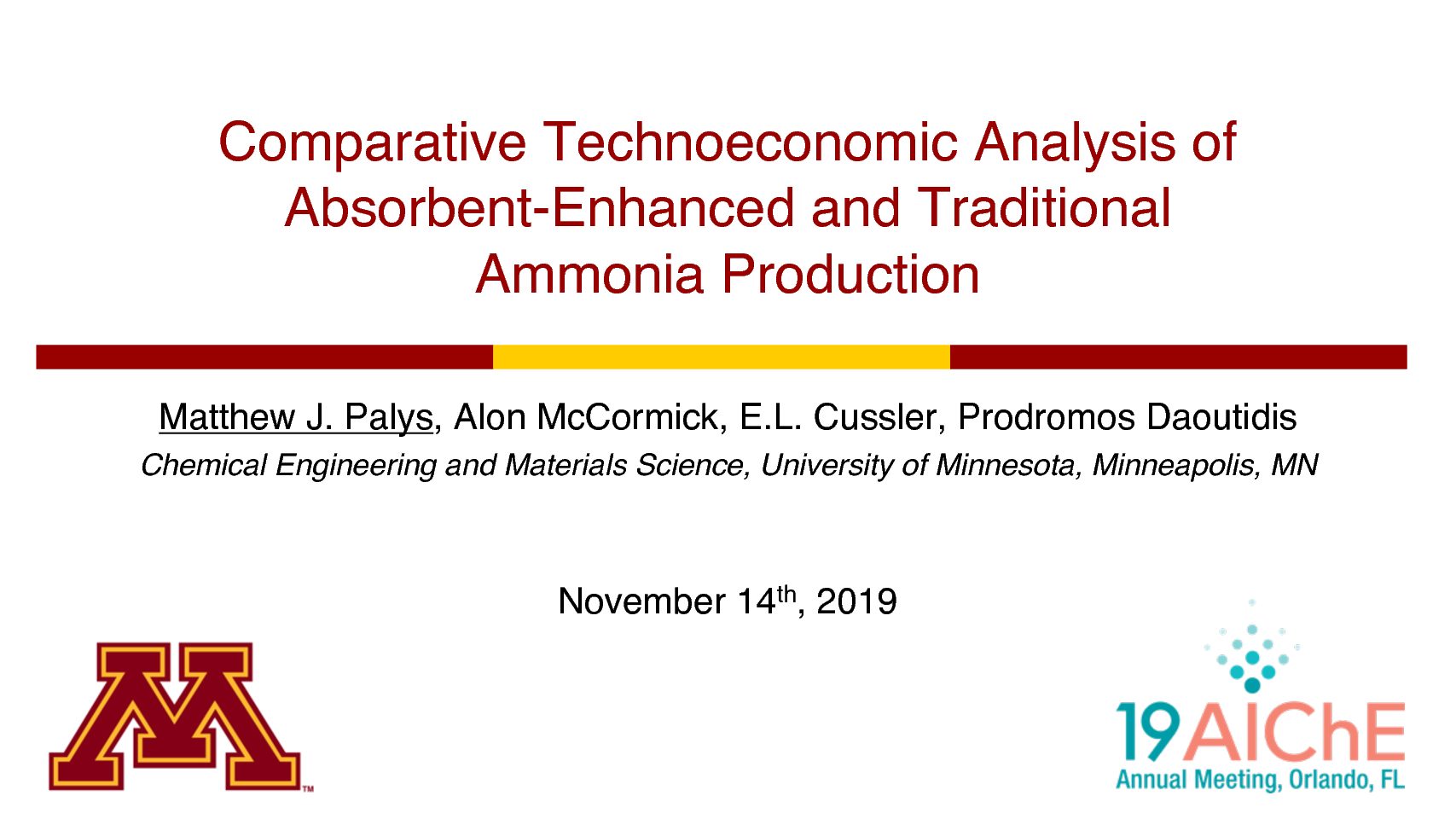 Ammonia is the second-most produced synthetic chemical and the main precursor for nitrogen-based fertilizer. In 2015, 160 million tons were produced globally, and global demand is expected to grow 1.5% annually until 2050 [1]. However, traditional ammonia production uses natural gas or coal as its hydrogen source, and as a result, is also responsible for more than 1% of global GHG emissions and 5% of global natural gas consumption [2]. Clearly, a more sustainable ammonia production scheme is needed. One such alternative is obtain hydrogen from electrolysis powered by wind- or solar-derived electricity. It has been proposed to perform this electrolysis-based ammonia production at small, distributed scales which afford better temporal flexibility to respond to the intermittent nature of these renewable energy resources. Previous research has performed technoeconomic analysis of electrolysis-based ammonia production at both centralized and distributed production scales [3, 4, 5]. However, these investigations have all considered the conventional, high pressure (above 85 bar) ammonia synthesis loop wherein a condenser is used to remove ammonia from unreacted hydrogen and nitrogen after the synthesis reactor.

Recently, alternative ammonia synthesis processes have been proposed with a view of reducing the GHG intensity of centralized production and/or reducing capital cost to enable distributed production to be economically competitive despite the inherent losses in economies of scale. One promising alternative is to replace the condenser used in the conventional process with a bed of ammonia-selective absorbent [6]. This absorbent-enhanced process allows for removal of ammonia at lower pressure (approximately 30 bar) and with less reactor effluent cooling than in the conventional process. We have previously created a mathematical model of this process. We used this model to optimize the design of the absorbent-enhanced process, minimizing its net present cost at distributed production scales of 800 to 80,000 ton/year under the condition that the process is powered exclusively with low cost wind energy [7].

However, the transition to a distributed, electrolysis-based ammonia production infrastructure will not be immediate, and retrofitting current natural-gas based production facilities with the absorbent-enhanced process may still reduce production costs or increase energy efficiency. To this end, in this work we extend the absorbent-enhanced process model to consider larger production scales, as well as to consider natural-gas based hydrogen production. We also develop a model of a conventional, condenser-based ammonia synthesis process. This conventional process model allows for validation of design assumptions (i.e. process configuration and unit capital cost correlations) based on the literature for technoeconomic analysis of conventional ammonia synthesis. These design assumptions can then be applied to the absorbent-enhanced process model to provide a consistent basis for comparison of the two processes.

Using these models, we determine and compare the levelized cost of ammonia production, total capital investment, energy use and GHG emissions of conventional and absorbent-enhanced process flowsheets, which have been optimized to minimize levelized cost. We consider both distributed (<500,000 ton/year) and large-scale/industrial (500,000 ton/year to 1,500,000 ton/year) ammonia production scales. For each of these production scale ranges, we consider hydrogen sourced from both natural gas and electrolysis and perform sensitivity analysis to natural gas (hydrogen) and electricity prices for these respective means of hydrogen production. This comprehensive technoeconomic analysis allows us to identify the production scales and market conditions for which the absorbent-enhanced process is best suited. Additionally, it reveals environmental policy considerations such as an emissions tax or “green” production credit necessary to enable renewable-powered electrolysis-based hydrogen production to be economically competitive.