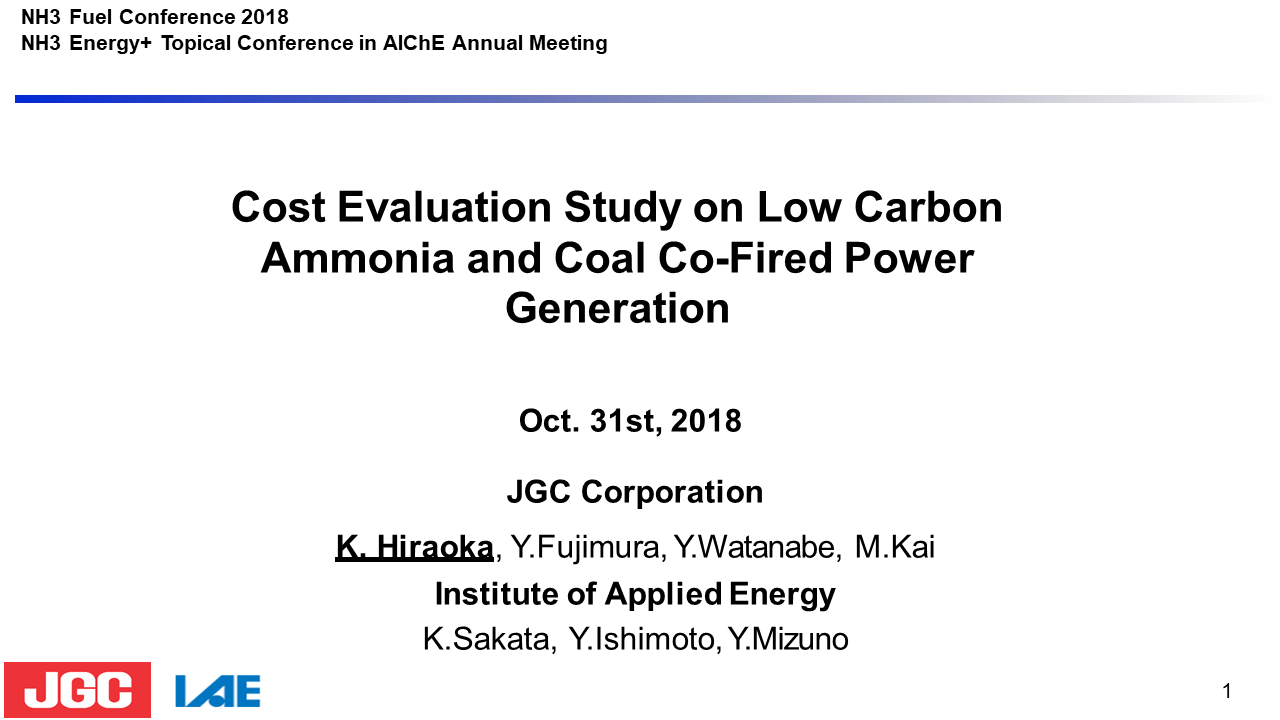 This study presents a cost estimation for electricity generated by CO2-free ammonia and coal co-firing. Regulation of CO2 emissions seems to be gaining pace due to the global warming issue so the introduction of CO2-free energy in power generation has become desirable. Ammonia is one of the potential energy carriers for power generation and development of ammonia combustion technology with low NOx emissions has been conducted in Japan. In order to investigate the feasibility of the introduction of CO2-free ammonia in Japan from both the technical and economic viewpoints, we estimated the ammonia supply chain cost from ammonia production integrated with CCS in the UAE and applied this to ammonia distribution for an ammonia-coal co-fired thermal power plant.

We have assumed that the timing of the commercialization of such an ammonia-coal fired thermal power plant is around 2025 and determined the premise of the supply chain study by referring to related technical reports and information from experts. We estimated ammonia production cost in UAE, ammonia supply cost to a power plant in Japan and the cost of electricity produced by ammonia-coal co-fired power generation. The ratio of ammonia co-firing is 20 %-ammonia on high heat value (HHV) basis. The price of natural gas in UAE, the price of thermal coal in Japan, and cost of CCS in UAE and Japan is determined in accordance with the prices under current market conditions. Although there is no stated value regarding the cost of CCS in UAE and Japan, we have set these values as a matter of practical convenience so that we take information from public reports and information from experts into consideration. Regarding the cost of CCS in UAE, we set two different price types, one is the cost which is for CO2 originated from natural gas as feedstock and the other is from natural gas as utility fuel. The former cost is named “Cost of CCS in process” and the latter is named “Cost of CCS in utility”. The reason for the different cost attributes is that a facility for CO2 capture and separation is introduced in the conventional ammonia production process. “Cost of CCS in process” is lower than “Cost of CCS in utility” by the reduction of the cost of CO2 capture and separation. Taking the ammonia supply cost into consideration, the electricity cost produced by ammonia-coal co-firing was estimated and we compared the estimated cost with the cost of electricity produced by conventional coal-fired power generation. Based on the estimation, we assessed the potentiality of ammonia as a CO2-free fuel for power generation.