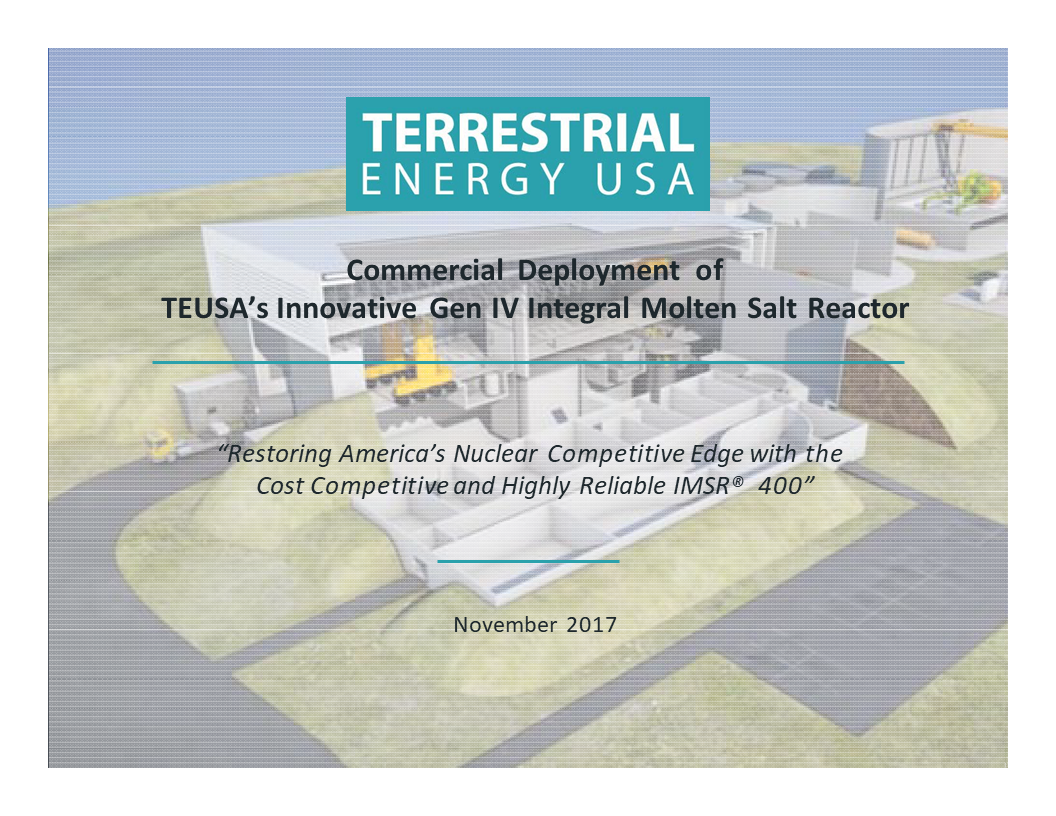 Demands for safe, secure supplies of potable water across the planet are increasing faster than can be provided by natural, ever-depleting sources of fresh water. At the same time, world demand for electric power is also accelerating.

Making H2 from Natural Gas is not an optimal or very efficient process that is also un-economic at higher and erratic gas costs.

Studies conducted by Terrestrial Energy USA and Idaho National Laboratory (INL) have shown that this new generation of IMSR would be the most effective system of those reviewed to ensure a growing H2 supply and energy to the grid. These H2 and power demands could both be served by a carbon free source of inherently safe, clean, non-proliferating energy.

Analysis by INL and Terrestrial USA have shown that IMSR is uniquely suited to be coupled to a pure H2 production from High Temperature Steam Electrolysis. The ability to immediately dispatch heat energy to where it is needed is a specific trait of the IMSR.

During 2016, 30 plants produced 9.4+ million tonnes of ammonia (NH3), principally based on the Haber-Bosch reaction processes. The principal feedstock to these plants is natural gas, which is reformed with steam to produce a target stoichiometric gas mixture of CO2, N2, and H2. Sorbents are used to remove CO2 and other contaminants prior to synthesizing NH3. Ammonia is used to produce a wide variety of fertilizers, nitric acid, fuels, and amine-based chemicals.

There are three outstanding opportunities for IMSR to benefit the large and growing NH3 Ammonia industry. First, hydrogen that is produced by high temperature steam electrolysis can replace the steam methane reformer. This would eliminate CO2 emissions altogether. Profitable Economic considerations are calculated on the cost of steam methane reforming and the value of GHG emissions avoidance and the market value of Oxygen production for Industrial uses.

The second opportunity for IMSR is to modify an interface with either a conventional or a revised steam methane reforming plant, a similar system to a manner used for methanol production.

All the vast benefits of a new NH3 Economy can be expedited into existence with the Hybrid coupling of IMSR400 Process Heat and Large Scale Ammonia production.