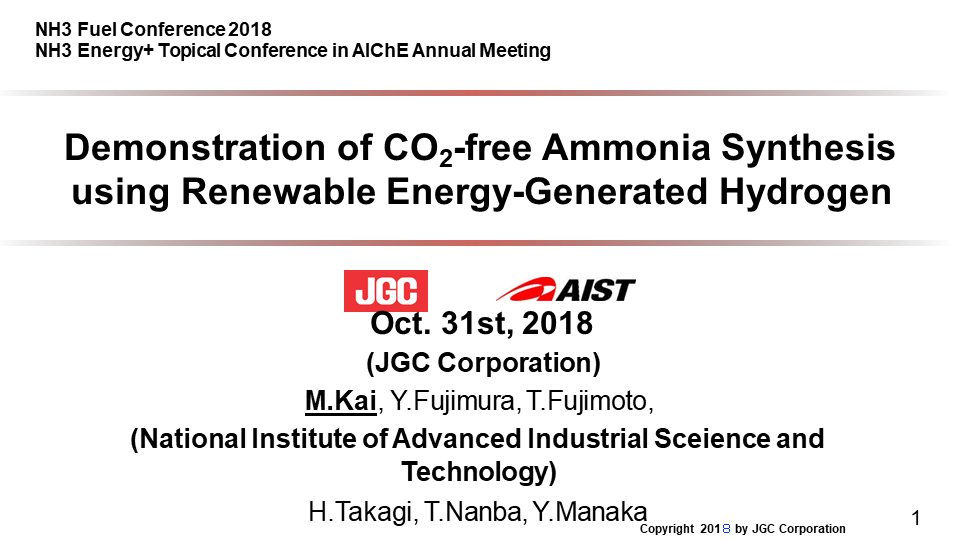 In Japan, the government funding project SIP, Strategic Innovation Promotion Program, supports the research, development and demonstration of “Energy Carriers”. The concept of the “Energy Carriers” value chain is to produce hydrogen energy carriers overseas from fossil resources using CCS or renewable energy, and transport it to Japan for utilization as clean energy. The purpose of the program is to help realize a low-carbon society in Japan by using hydrogen. Among energy carriers, ammonia is the one of the most promising carriers, because of the ease of transportation as a liquid, higher hydrogen density, and proven technologies for commercial and industrial scale, not only for production, storage, and transportation, but also its utilization in chemical plants and DeNOx units for electric power plants.

Under the theme of “Development of ammonia synthesis from CO2-free hydrogen” of SIP ”Energy Carriers”, JGC is developing the advanced ammonia synthesis process using renewable energy, such as Photovoltaic and Wind Turbine Power Generation, to be able to produce “Green” ammonia, aiming to contribute to a low-carbon society. Also, utilizing the catalysts developed by the National Institute of Advanced Industrial Science and Technology (hereinafter “AIST”), National Institute of Technology Numazu College, and JGC C&C, AIST and JGC designed and constructed an ammonia synthesis demonstration plant in FREA, the Fukushima Renewable Energy Institute, AIST by the end of fiscal year 2017. From April 2018, the plant started operation to evaluate the performance of the developed catalysts and acquire the engineering data for scaling up in the future.

In this paper, we would like to explain the details of the ammonia synthesis demonstration plant in FREA, such as process flow, plant operation conditions, its capacity, and the status of plant operation.

One of the key features of the developed catalyst is its high performance at lower temperature and lower pressure than the conventional Haber-Bosch process. The lower operation pressure contributes to lower CAPEX and OPEX for ammonia production using renewable energy.