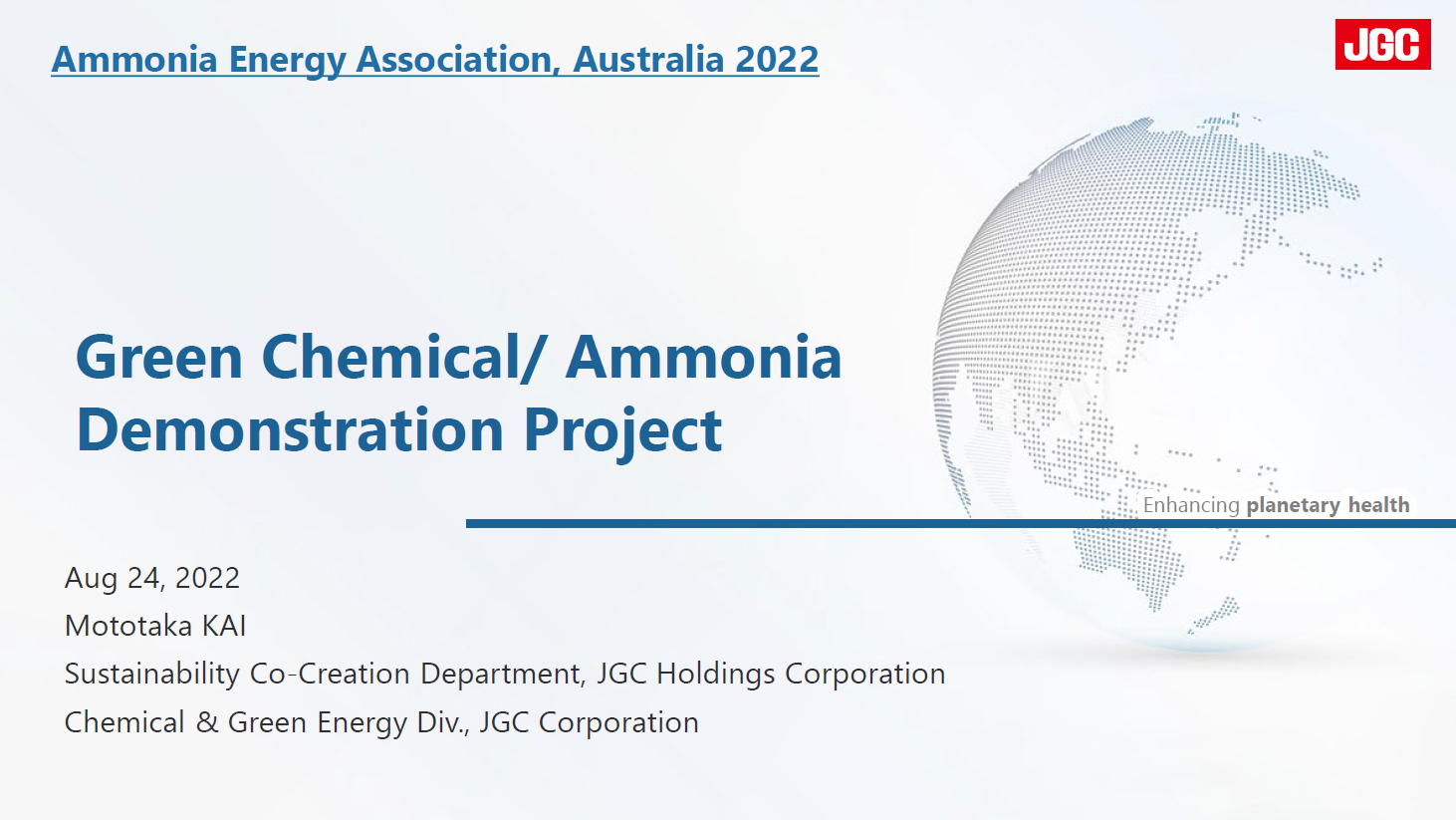 To achieve the carbon neutrality target set to be accomplished by 2050, hydrogen will play an important role in many sectors such as power, transportation, and industrial applications. Especially in the chemicals and fertilizers sectors, green ammonia, made by utilizing renewable energy as a feed stock, is expected to be materialized, and is also being considered as a hydrogen carrier with the advantage of easier transportation and handling than the hydrogen itself. Hence, in the near future, green chemical production facilities which are fed with hydrogen produced through the use of renewable energy will be installed instead of the conventional chemical production facilities which use hydrocarbon resources.

In light of this future requirement, JGC Holdings Corporation (JGC) and Asahi-Kasei Corporation (Asahi Kasei) have jointly applied for recognition of a project entitled “Large-scale Alkaline Water Electrolysis System Development and Green Chemical Plant Demonstration” (the Project) under the “Green Innovation Fund/Hydrogen Production by Water Electrolysis Using Renewable Energy” envisioned to be carried out in the fiscal 2021-2030 period by Japan’s New Energy and Industrial Technology Development Organization (NEDO), and the project has been accepted. In the Project, Asahi Kasei will develop the large alkaline water electrolysis system on a scale of up to 100 MW with module technology for parallel installation of electrolyzers to meet market needs from the perspective of safety, durability, performance and cost. JGC and Asahi Kasei will jointly develop the integrated control system for the green chemical plant and demonstrate its suitability for producing the hydrogen and synthesizing the carbon neutral basic chemicals, such as green ammonia.

One of the main highlights of the development is the integrated control system. This system is capable of optimally operating the green chemical plant even with unstable renewable power sources. The input information from weather prediction involved in electric power generation, water electrolyzer operation involving hydrogen generation and intermediate tank hydrogen retention providing the output information to determine the plant operating prospects load determination for the Advanced Plant Control and Distributed Control System. In addition to these features, the fully automated plant operation system which JGC has developed and installed in another past project is capable of automated plant start up and shut down without operator involvement. These two technologies are combined as an integrated control system to accelerate the green chemical plant commercialization and market creation by elucidating benefits and challenges related to practical application. The early phase in the Project, the medium-scale demonstration plant combining the 10 MW class water electrolysis system fed by photovoltaic electricity and the ammonia synthesis plant will be installed, and this plant operation is scheduled to start from 2024, looking ahead toward commercial scale development. The later phase in the Project, the 40 MW class water electrolysis combining with the basic chemical synthesis facility as a commercial scale green plant, will be designed and installed. The plant demonstration operation will be started in 2027, and the various evaluations and verifications such as the economic and the plant operability will be completed in 2030.