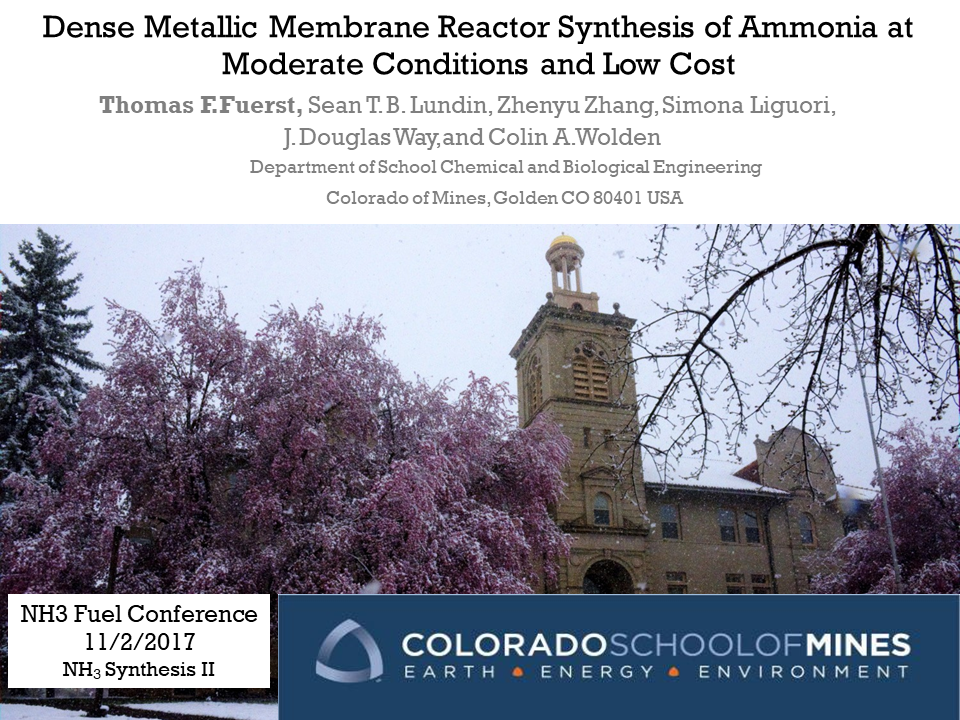 Commercial ammonia synthesis relies on the Haber–Bosch process that has remained largely unchanged for a hundred years. The equilibrium constant of this exothermic reaction quickly becomes unfavorable above 200 °C, but the catalyst requires temperatures above 400 °C to have sufficient activity. To overcome these conflicting requirements the process is conducted at extremely high pressure (100 – 200 atm) using multiple passes with inter-stage cooling to achieve sufficient conversion. A cost analysis reveals the compressors needed to reach the required pressures consist of 50% the capital cost for Haber-Bosch. Therefore, a longstanding scientific challenge has been to achieve NH3 synthesis at near ambient pressure which could reduce the ammonia production cost by as much as 30%.

Dense metallic membranes are known to offer a unique mechanism for hydrogenation reactors by providing permeating atomic hydrogen for the preferential partial hydrogenation of some hydrocarbons. Yet, this concept for ammonia synthesis has not fully been explored. With additional motivation from electrochemical cells and recent DFT studies on the possible metal catalysts, a new concept for ammonia synthesis has been developed using a hydrogen permeable membrane made from cost effective group V metals. This base metal membrane is coupled with asymmetric catalyst coatings to allow hydrogen permeation and nitrogen dissociation on respective membrane surfaces. The combination of the modified nitrogen dissociation surface catalyst and the highly reactive permeating hydrogen allows ammonia to be formed at low pressures and moderate temperatures. Using this concept, we have measured NH3 synthesis rates as high as 6 × 10-9 mol cm-2 s-1 in preliminary experiments at 500 °C and 0.8 bar. These rates are competitive with analogous experiments using ceramic proton conducting membranes. Performance and stability will be discussed with various catalyst and hydrogen permeating base metal combinations to understand the full potential of this ambient pressure ammonia synthesis method.