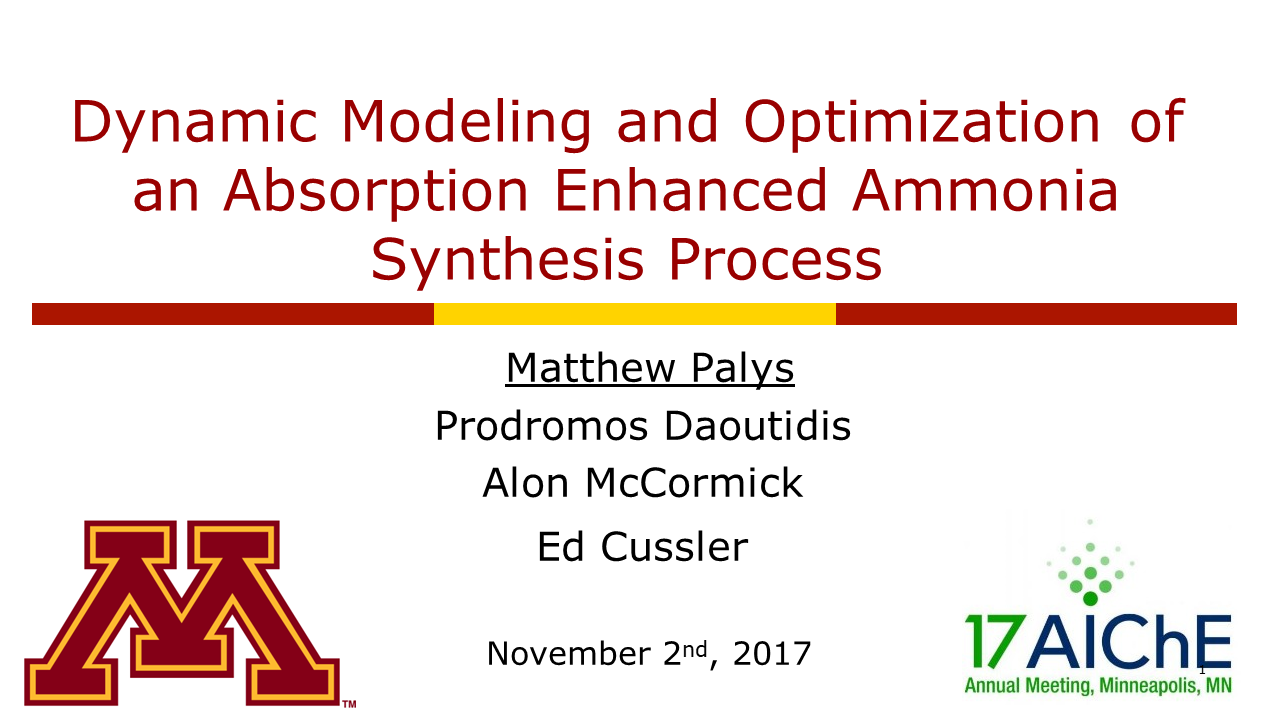 Distributed ammonia generation located near farms is a promising alternative to the current practice of large-scale, centralized production. This production mode would reduce the need for transportation of ammonia over long distances currently caused by the mismatch between production and consumption locations. In addition, a small-scale ammonia synthesis process could more easily take advantage of distributed power generation based on wind or sunlight to reduce energy costs and lessen the dependence on fossil fuels. Distributed, renewables-based fertilizer production would largely insulate farmers against market uncertainty while also increasing the sustainability of the agricultural supply chain.

However, a technically proven, economically competitive small-scale ammonia synthesis process which would facilitate this distributed generation paradigm does not currently exist. A wind powered plant which uses a scaled-down Haber-Bosch process has been installed in Morris, Minnesota [1], but ultimately, this process is too complex to operate and too costly for deployment on the scale of a farm or small group of farms. Recently, a novel reactive-separation process for ammonia synthesis has been proposed and proven on a lab scale [2]. A conventional catalyst is used to carry out the synthesis reaction. Then, ammonia is removed via chemisorption while unreacted hydrogen and nitrogen are recycled. This allows equilibrium limitations to be overcome and can facilitate operation at lower pressure and without the large temperature change exhibited in the Haber-Bosch process.

In this work, we develop a dynamic model of the above-described ammonia synthesis process created using gPROMS Process Builder to inform scale-up to pilot plant (1 kg ammonia/day) scale. We study three modes of operation: batch, fed-batch (during which make-up feed is added to maintain constant flow through the reactor) and variable-input (during which feed rate fluctuates dynamically). For each mode of operation, operating conditions and equipment sizes which minimize energy requirements are determined using gPROMS dynamic optimization tools. These optimizations are performed for a range of unit capacities to generate data from which simplified rules for determining capital cost and power requirement are developed.

We then use these rules in determining the economically-optimal design of a distributed ammonia generation superstructure which employs this reactive-separation process. This superstructure uses only renewable energy to provide ammonia fertilizer for a single farm. The full system can consist of PV arrays, wind turbines, a battery bank, hydrogen, nitrogen and ammonia storage vessels, electrolysis and pressure swing adsorption units and a modular ammonia synthesis unit. The net present cost (NPC) of supplying ammonia over a 20 year project lifespan is minimized by determining the optimal selection and size of these units. One year of system operation is considered to account for the seasonal variation of renewable power availability and fertilizer demand. Unit operating conditions are allowed to vary hourly to account for hourly changes in solar and wind power availability; these availability profiles are synthesized using relevant weather data (e.g. insolation, ambient temperature, wind speed) for a typical meteorological year. The total operating cost over the project lifetime is determined by scaling up this single year cost using a discount rate. This problem is formulated as a mixed integer linear program (MILP) and is solved in GAMS using CPLEX.

The NPC of the optimal design will be compared to that of purchasing anhydrous ammonia from the current centralized infrastructure over the same 20-year period. This comparison will be used to determine ammonia market conditions under which the distributed, renewables-powered process becomes economically competitive. Additionally, analyzing each unit’s contribution to the total cost will aid in identifying the most beneficial individual unit efficiency improvements or capital cost reductions.