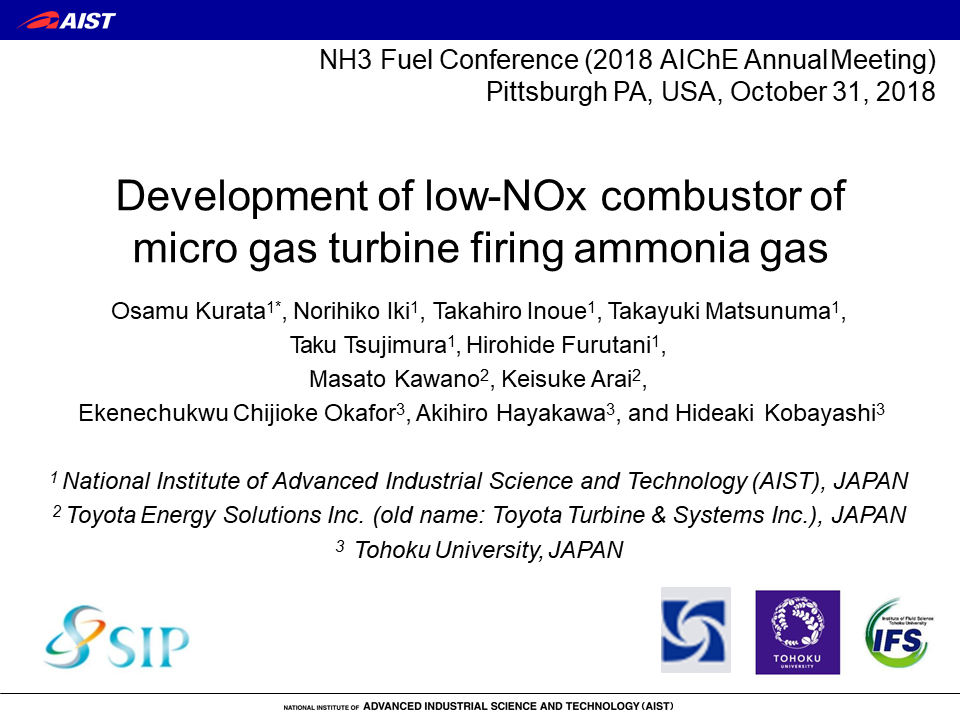 A massive influx of renewable energy is required in order to mitigate global warming. Although hydrogen is a renewable media, its storage and transportation in large quantity is difficult. Ammonia, however, is a hydrogen energy carrier, and its storage and transportation technology is already established. Although ammonia fuel combustion was studied in the 1960s in the USA, the development of an ammonia fuel gas turbine had been abandoned because combustion efficiency was unacceptably low [1]. Recent demand for hydrogen energy carrier revives the usage of ammonia fuel. The National Institute of Advanced Industrial Science and Technology (AIST) in Japan, in collaboration with Tohoku University successfully realized ammonia-kerosene gas turbine power generation in 2014, and ammonia fuel gas turbine power generation in 2015 by using 50-kWe class gas turbine [2, 3].

The drawback of the facility is that it requires a large-size selective catalytic reduction (SCR) to decrease the high concentrations of NOx. In order to promote the widespread of ammonia combustion gas turbine system, it is necessary to downsize SCR NOx reduction. In other words, it is important to reduce NOx emission from ammonia gas turbine combustor. AIST has begun developing low-NOx combustors by using a combustor test rig. Simultaneously, fundamental research was carried out at Tohoku Univ. It was found at Tohoku Univ. that rich-lean two-stage combustion method and a control of equivalence ratio of the primary combustion zone to around the value of 1.1 to 1.2 significantly decreases NO emissions in gas-turbine swirl combustor [4, 5].

Based on the knowledge of rich-lean combustion method, the flow paths of the combustor in the combustor rig tests were systematically varied to make a fuel rich region in the primary combustion zone. First, NOx emissions of standard combustor was measured in the range of fuel input energy of 140 to 330 kJ/s where NH3 fuel input energy of 236 kJ/s was over the limit that can be supplied by an NH3 fuel supply facility. Although, input energy over 236 kJ/s was supplied by CH4 fuel, it was shown in the previous study [3] that the addition of NH3 in the CH4+NH3 mixture increased the NO emissions for the most part. NO emission of standard combustor was flat 1000 (16% O2) ppm from 140 to 330 kJ/s of CH4+NH3 fuel input energy. Next, NOx emissions of the modified combustors were measured. The modifications applied to the combustor included filling the primary dilution holes by using stainless bolts, opening the secondary dilution holes by drilling, and halving the air swirler area by using stainless hook or stainless wire reel. These modifications were intended to increase the equivalence ratio of primary combustion zone. Valley of NO emissions of the modified combustor was observed in the range of fuel input energy of 140 to 236 kJ/s, which implied the ability of low-NOx gas turbine combustion firing ammonia gas.