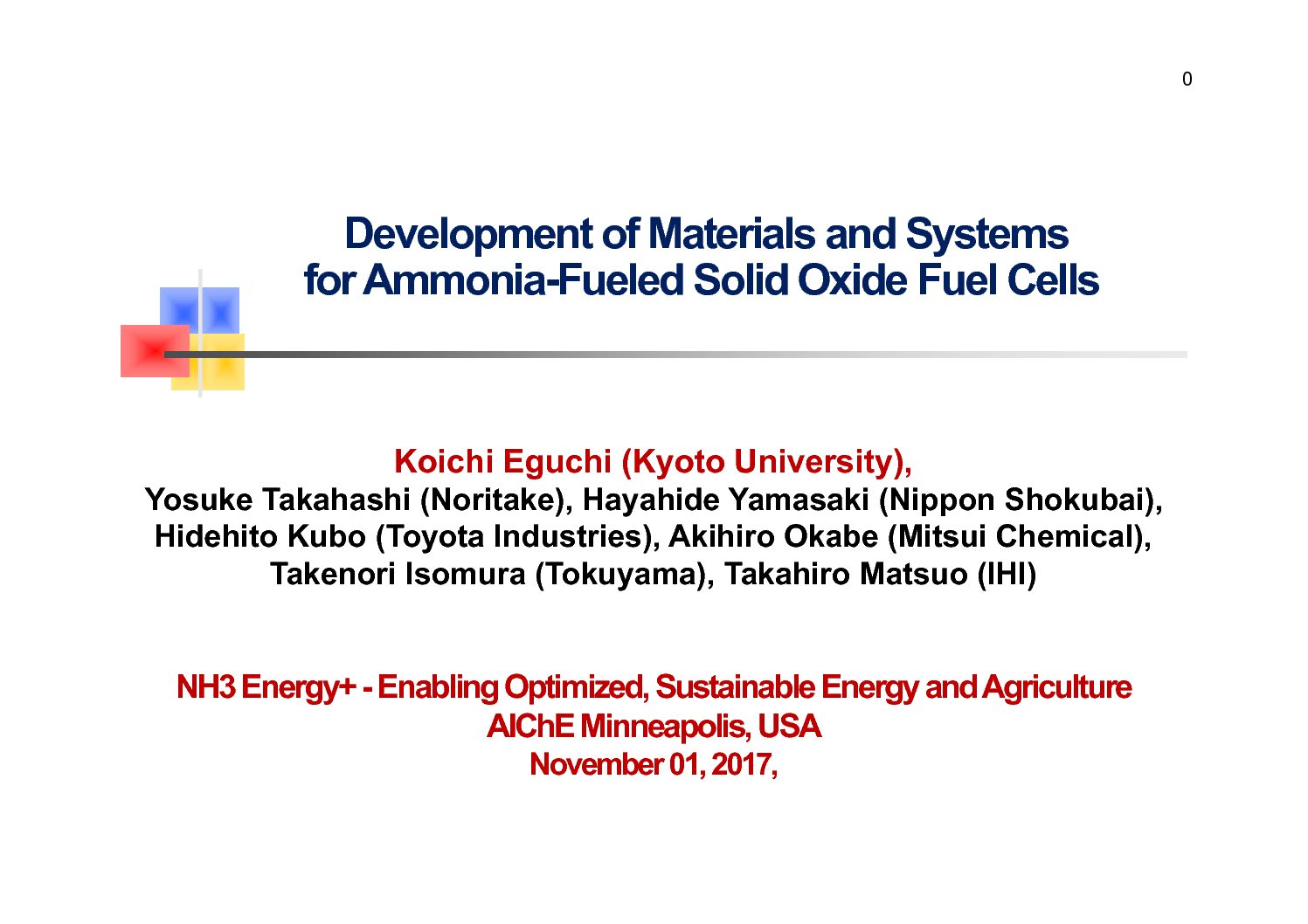 Hydrogen is the primary fuel source for fuel cells. However, the low volume density and difficulty in storage and transportation are major obstacles for the practical utilization. On-site generation of hydrogen from its carrier is an effective method for the fuel supply. Among various hydrogen carriers, ammonia is one of the promising candidates. Ammonia has high hydrogen density. The boiling point of ammonia is relatively high, leading to the ease in liquefaction and transportation. Hydrogen can be produced from ammonia with a mildly endothermic process. The reaction temperature of ammonia cracking is about 600˚C or higher which is close to the operating temperature of solid oxide fuel cells (SOFCs). The integration of these two devices is beneficial in terms of heat and energy managements and will lead to the development of simplified power generation systems. In this presentation, three types of ammonia-fueled SOFC systems have been investigated.

In the first system, dry ammonia is directly supplied to the anode chamber. Ammonia decomposes into nitrogen and hydrogen over the anode, and subsequently the produced hydrogen is electrochemically oxidized to generate steam and electrons. The second system consists of an ammonia cracker and SOFC. In this case, ammonia is catalytically decomposed in the ammonia cracker, and produced hydrogen is consumed as a fuel of SOFC. The development of the catalyst for ammonia cracking is a key process. Moreover, heat generated from SOFC can be effectively transferred to the endothermic process of ammonia cracker. The third system is composed of autothermal ammonia cracker and SOFC. In the autothermal ammonia cracker, the ammonia oxidation as well as the ammonia cracking proceed simultaneously over the catalysts. The ammonia oxidation enables the quick start-up of the autothermal cracker itself and SOFC due to its exothermic nature. It is important to develop the catalyst and control the reaction conditions. For the ammonia fueled SOFCs, previously, coin type cells have been applied. On the other hand, there have been few studies using commercial-size cells or stacks. A demonstration of the stack-level ammonia-fueled SOFC systems is an important step for the actual utilization of ammonia-fueled SOFCs. In this study, a 200 W class SOFC stack was applied for ammonia fueled SOFC systems.

First, the catalytic activity of Ni/Y2O3 and SrO modified Ni/Y2O3 for ammonia cracking was evaluated. These catalysts were reduced at 600ºC prior to the evaluation. For the Ni/Y2O3 catalyst, the ammonia conversion increased with temperature and achieved about 100% at 650ºC. The SrO modified Ni/Y2O3 catalyst showed much higher performance than Ni/Y2O3 and achieved about 100% at 600ºC. The addition of SrO was effective for the ammonia cracking over the Ni-based catalysts. Both catalysts could decompose almost the all ammonia below 650ºC, which is lower than the typical operating temperature of SOFCs. This means the ammonia cracking can proceed without an external heating in the integrated system with SOFCs. The durability test for SrO modified Ni/Y2O3 catalyst was conducted at 700ºC. The catalytic activity was evaluated at 515 and 565ºC during the test. This is because the ammonia conversion will maintain about 100% at 700ºC. So the degradation of the catalyst cannot be precisely confirmed. This figure shows the time course of ammonia conversion at 515 and 565ºC during the durability test at 700ºC for 1000 hours. This catalyst maintained high activity after 1000 h, even though the catalyst was subjected to many thermal cycles between 515 and 700ºC as well as continuous operation at 700ºC. The high activity of the catalyst for ammonia cracking was maintained at 700ºC over 1000 h.

Next, we evaluated the catalytic activity of Co-Ce-Zr composite oxide for autothermal ammonia cracking. The ammonia conversion increased with an increase in air / fuel ratio (AFR) and achieved about 98% at an AFR of 0.9. However, a large amount of ammonia and produced hydrogen should be consumed by oxygen at high AFR conditions, leading to low electrical efficiency of the ammonia fueled SOFC system. It is necessary to operate the autothermal ammonia cracker at a suitable AFR condition, considering the electrical efficiency as well as the amount of heat generated in the cracker. The autothermal ammonia cracking at about 0.45 corresponds to a thermoneutral reaction. So, more than 0.45 of AFR is required for the self-sustained operation of the cracker without an external heating. In this study, the AFR value for the supply of the autothermally cracked ammonia to the SOFC stack was set to be 0.75 because a sufficient heating value as well as a high ammonia conversion could be expected. The temperature range was within 500 to 600ºC. The temperature increased at the inlet zone of the catalyst which was ascribable to the exothermic reaction of ammonia oxidation. Then, the temperature continuously decreased in the middle and downstream zone, indicating the ammonia oxidation was gradually terminated and the ammonia cracking became dominant. The durability test for the Co–Ce–Zr composite oxide was also conducted. The time course of ammonia conversion was measured at an AFR of 0.75 for 1000 h. The ammonia conversion slightly decreased with operation time, but maintained about 80% after 1000 h of operation. One possible reason for this degradation is the sintering of the catalyst.