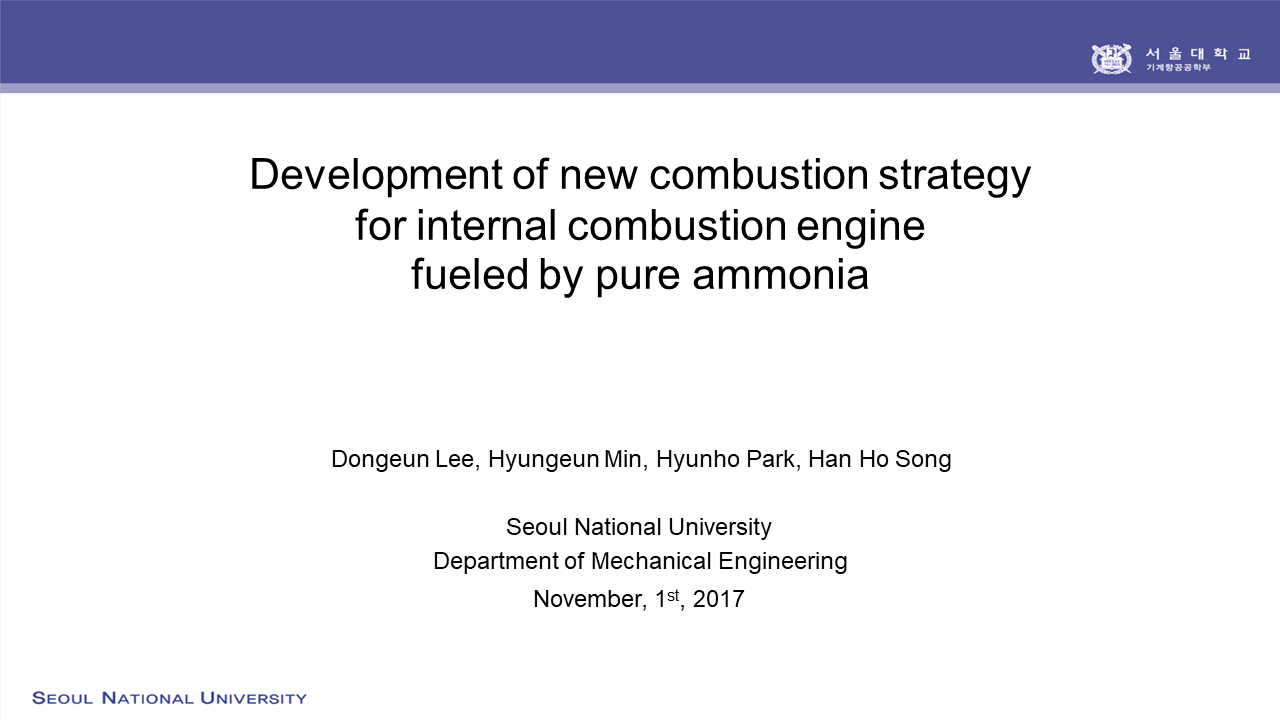 Ammonia is considered as a promising hydrogen-carrier with good storability and transportability, which, then, can be used as a carbon-free fuel as needed. However, once the ammonia is produced from the regenerative sources, it is essential to develop the energy conversion device of the chemical energy stored in ammonia into some other useful forms, e.g. electricity. Among various candidates, we focus on an internal combustion engine as energy conversion device which can be applied on automobile, power plant and etc. and can use ammonia as fuel only by simple modification. There have been many studies on the use of ammonia as an engine fuel, but rather poor combustion characteristics of ammonia for conventional engine combustion techniques was seen as difficult to overcome and nearly all the researchers compromised by using additional fuels which combusted better than ammonia for their purposes.

In this study, new combustion strategy for internal combustion engine fueled solely by ammonia is proposed to resolve the limitation of previous studies where additional fuel is used as a combustion promotor. In the proposed combustion strategy, only a small amount of ammonia is injected into the cylinder during intake process or early compression stroke. The ammonia injected forms the homogeneous mixture with air and auto-ignition of the pre-mixed lean ammonia-air mixture occurs near the end of the compression stroke. The auto-ignition increases the pressure and temperature inside the cylinder enough to burn the main spray injection of ammonia as in conventional diesel engine. After the main combustion event, additional ammonia is post-injected to reduce the nitrogen oxides (NOx) through in-situ selective non-catalytic reduction during the expansion stroke. To validate the feasibility of the strategy proposed, in-house engine simulation model has been developed. The model adopts the quasi-dimensional spray model and detailed chemical reaction mechanism for ammonia to consider the physical characteristics of fuel spray and to catch the sensitivity of ignition of lean ammonia-air mixture at low time cost.

As a result, when compared to the engine operation with a single main injection of ammonia which typically requires as high compression ratio as 50:1, the compression ratio can be reduced to 35:1 with the new combustion strategy. Operating characteristics of the engine have been studied according to the variation of the start of main injection (SOI) and the ratio of pilot injection and main injection. Under most load conditions, too early SOI prevents the auto-ignition of pre-mixed lean ammonia-air mixture due to charge cooling effect of main spray evaporation, while too retarded SOI also leads to the incomplete combustion mainly due to the cooling from the cylinder expansion. This operable SOI window is shifted into the expansion stroke as the fuel mass of pilot injection increases due to the delayed combustion phase of auto-ignition of pre-mixed ammonia-air mixture. At low load condition, too advanced SOI does not make misfire but HCCI-like combustion occurs and transition from HCCI-like combustion to typical spray combustion appears as SOI is retarded gradually. Thermal efficiencies under various ratios of pilot and main injection have also been compared and analyzed. A unique formation and destruction characteristics of NOx emission were observed with new combustion strategy. A part of NOx generated by the auto-ignition of pre-mixed ammonia-air mixture is also reduced in the rich spray zone. Additional pathway analysis has been performed to understand the mechanisms by which the NOx is produced and reduced.