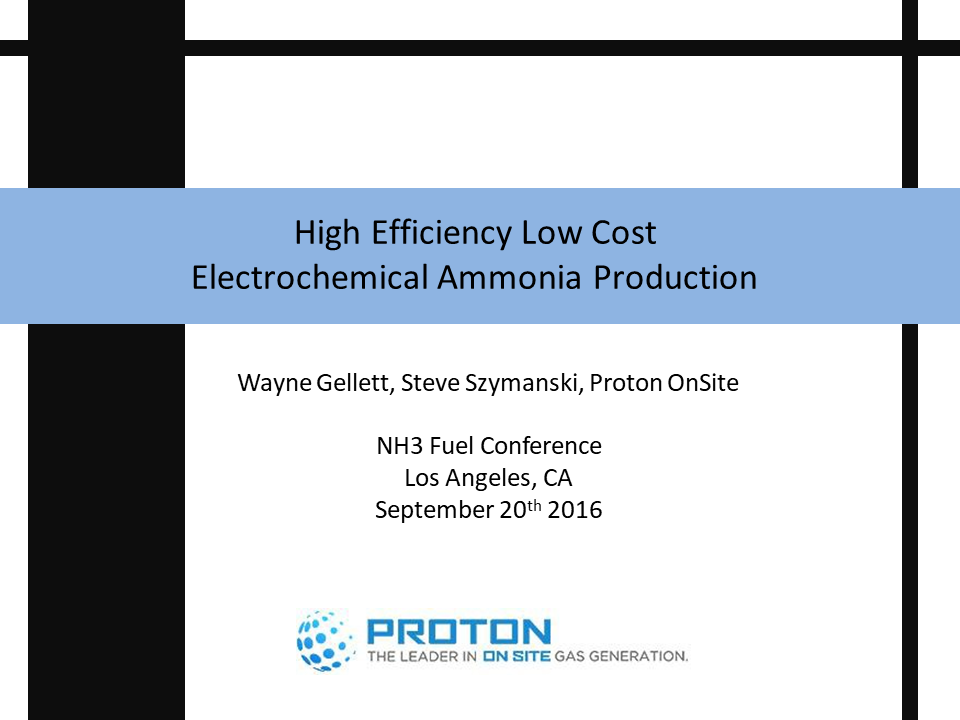 Proton Energy Systems, d/b/a Proton OnSite, is a technology and commercialization leader in the field of membrane based electrolysis. The company was founded on the vision of utilizing electrolysis technology for the capture and storage of energy in high value applications. Recently, the concept of storing electrical energy in the form of a carbon neutral liquid fuel, particularly ammonia, has been gaining traction within the research investment community.

Proton has been participating in collaborative research with the University of Minnesota to advance the system concept for distributed ammonia production using wind-derived hydrogen (via electrolysis) and subsequent conversion to ammonia using traditional thermochemical processes (e.g. Haber-Bosch). While this is one viable production pathway for renewable ammonia, the cost challenges associated with scaling an electrolysis/Haber-Bosch plant to relevant distributed wind scale (10’s to 100’s of MW) proves to be challenging using today’s commercial technology. However, we believe that advances in both the electrolysis process and the Haber-Bosch synthesis process will help address the techno-economic challenges for this approach.

An alternative to this renewable ammonia concept is direct electrochemical conversion of water and nitrogen to ammonia. Proton OnSite is investigating two different pathways for low temperature, membrane based electrochemical ammonia synthesis. The first approach is using an anion exchange membrane (AEM) to conduct hydroxide ions between the cathode and anode. While the ammonia production rate is lower than in other electrochemical approaches, the AEM technology stands out as having the most potential for efficient ammonia production at low temperatures. Approaches to increase the current density in our USDA-funded project include membrane development toward more stable materials, as well as catalyst development toward selective and stable materials at higher voltages. In addition, the use of better oxygen evolution reaction (OER) catalysts is a significant opportunity to reduce overpotential.

A second approach to direct electrochemical synthesis will be investigated in a new DOE-funded SBIR project entitled “Nitrogenase Inspired Peptide-Functionalized Catalysts for Efficient, Emission-Free Ammonia Production.” In this project, we propose to develop a catalyst manufacturing approach which will utilize peptides to 1) control nanoparticle (NP) synthesis, and 2) functionalize the NP catalyst surface to facilitate NH3 production. The key technology advancement will be to demonstrate production of ammonia from nitrogen and water in an electrochemical system utilizing the proposed peptide-functionalized nanocatalyst approach. The main goal will be show that the developed material has higher performance than other catalysts found in literature at low temperatures, which typically have not had greater than 1% Faradaic efficiency.

In this presentation, we will provide an overview of our research activity and findings on both projects, and thoughts for future work in this innovation space.