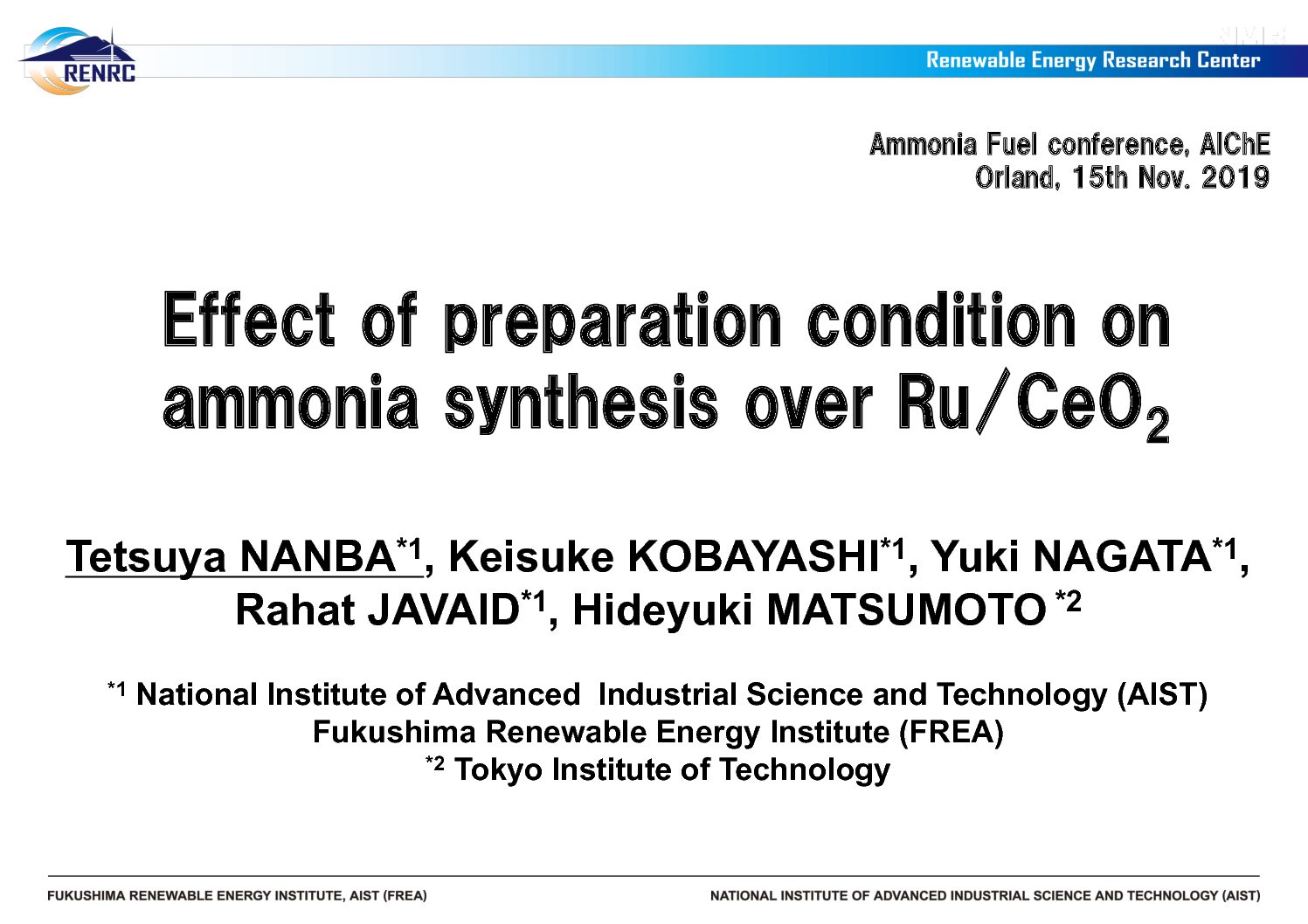 Ammonia is one of the promising hydrogen/energy carrier. Haber-Bosch process uses hydrogen produced from fossil fuels, so that the replacement of the hydrogen source from fossil fuels to renewable energy is a promising way to reduce CO2 emission, that is, the green ammonia synthesis. On the other hand, the hydrogen derived from renewable energy is provided at ambient pressure and temperature, so energy consumption for pressurizing and increasing temperature of the hydrogen feed is a lot. Desirable operation conditions are lower temperature and pressure than those for the Haber-Bosch process. Considering the fluctuation profile of hydrogen feed, ammonia synthesis process should work in various temperature, pressure, space velocity, and H2/N2 ratio. In other words, the catalytic activity for ammonia synthesis has to be evaluated not at a certain condition but in the wide range of these parameter. We focused on Ru/CeO2, and then attempted to optimize the preparation condition, and then we have operated the demonstration plant for the ammonia synthesis, assuming introduction of the fluctuating hydrogen feed. In this study, we report that the investigation of the catalytic optimization and characterization of the chemical properties.

From the results of catalytic activity measurement, NH3 synthesis activity of Ru/CeO2 was strongly influenced on not only the preparation method of CeO2 but also the kinds of Ru precursor. The high surface area was not necessary for obtaining high activity. For the commercial CeO2 with the specific surface area of 150 m2/g, NH3 synthesis activity decreased in the order of Ru precursor, Ru(NO)(NO3)3 > Ru(acac)3 > Ru(dpm)3 > Na2RuO4 > RuCl3 > Ru3(CO)12 > [Ru(OH)(NO)(NH3)4](NO3)2 > Ru(NO3)3 > Ru(NH3)6Cl3. When the high surface area CeO2 calcined at 500oC in air before Ru loading was used as the support material, NH3 synthesis activity decreased in the order of Ru3(CO)12 > Ru(NO)(NO3)3 > Na2RuO4 > RuCl3 > [Ru(OH)(NO)(NH3)4](NO3)2 > Ru(acac)3 > Ru(dpm)3 > Ru(NO3)3 > Ru(NH3)6Cl3. These result let us suspect that there is the optimum combination between the surface chemical property of CeO2 and Ru precursor.

For the selected Ru/CeO2, kinetics parameters were obtained and the activities under high pressure were measured. Ru/CeO2, which was prepared by using Ru(NO3)3 precursor and CeO2 with the specific surface area of 100 m2/g, showed increase in the space time yield (mmol/g/h) with increasing pressure up to 10 MPaG. Although Ru catalysts have been reported to exhibit the maximum activity at a relatively low pressure [1], Ru/CeO2 exhibited no peak below 10 MPaG. This result suggests that Ru/CeO2 can be operated in the range of atmospheric to 10 MPaG, according to the fluctuation of H2 supply. The measurement of the reaction order with respect to H2 revealed that Ru/CeO2 exhibited the positive values at both 325 and 400oC, and the values for below and above stoichiometric feed composition were different. Additionally, From kinetic simulation, it is suspected that NH3 partial pressure influenced on the increase in NH3 formation rate.

To make sure a reason why Ru/CeO2 showed no inhibition by H2 up to 10 MPaG, the physical and chemical surface properties were characterized. CO pulse adsorption indicated that Ru/CeO2 had the large amount of CO adsorption, which was larger than the amount of Ru atoms, suggesting that CO was adsorbed not only on Ru but also CeO2. The spillover phenomenon would be related to the strong interaction between metal and support [2]. So, we evaluated the correlation between the amount of CO adsorption and the catalytic activity. We compared the catalytic activity and CO adsorption for varisou Ru/CeO2s, and then found that NH3 formation rate increased with increasing CO adsorption amount.

H2-TPR was carried out for the evaluation of the reducibility of Ru oxides and CeO2. Ru/CeO2 having relatively high NH3 synthesis activity exhibited the reduction peaks below and above 200oC. The lower temperature peak appeared the higher catalytic activity. The amount of H2 consumption corresponding to the low temperature peaks were calculated. H2 consumption was larger than the estimated H2 consumption for RuO2, suggesting that CeO2 was reduced even at around 100oC, accompanying with Ru oxide reduction. Since CeO2 reduction occurs more than 300oC, the low temperature reduction is suspected to indicate the interaction between Ru and CeO2. As a conclusion, a strong interaction between Ru and CeO2 is important factor for obtaining high NH3 synthesis activity.