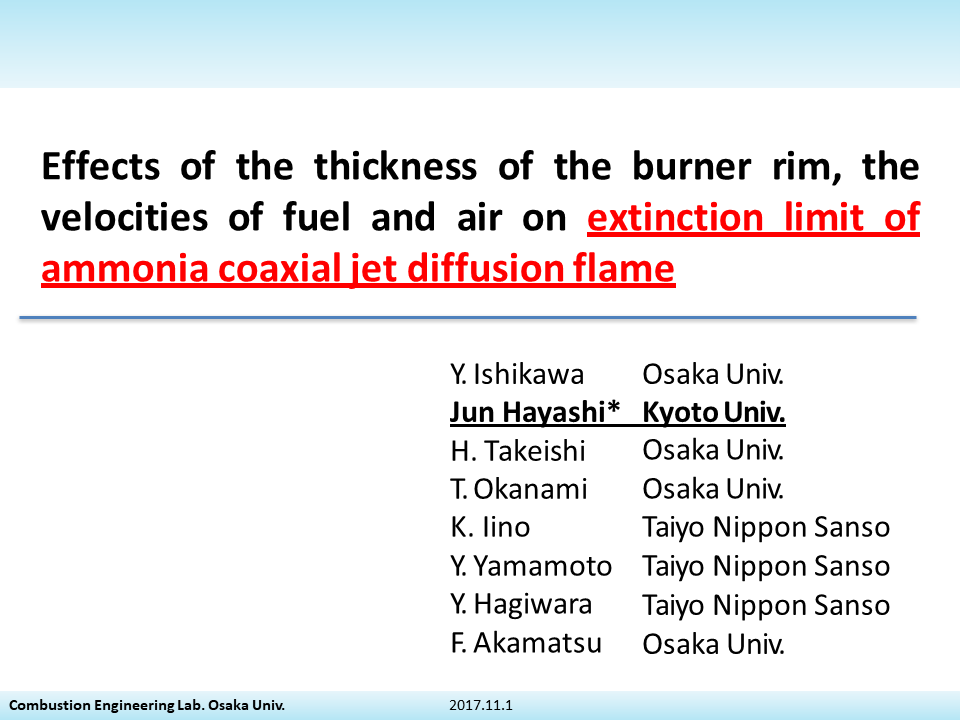 Ammonia is regarded as one of the alternative fuels because CO2 doesn’t emit during the combustion process of ammonia. Ammonia also has advantages in storage and transportation. In addition, ammonia has a potential to be a “hydrogen carrier” because of high amount of hydrogen content. However, there are several combustion related problems such as the low flammability, the low radiative power and the high NOx formation. To use ammonia as a fuel, therefore, it is necessary to understand the fundamental phenomena of the combustibility of the ammonia such as laminar burning velocity, strength of the radiation and extinction limit. Since a coaxial jet diffusion flame is commonly used on the industrial furnaces, the extinction limit of ammonia coaxial jet diffusion flame is important to know for developing ammonia-flamed furnaces.

In this study, therefore, extinction limit of ammonia coaxial jet diffusion flame was experimentally investigated by verifying the effects of the thickness of the burner rim, the fuel velocity and the oxidizer velocity. In addition, since ammonia flame could not form in the ordinal oxygen concentration of air (21%), the oxygen-enriched combustion was applied on this study. Results showed that the required the oxygen concentration in the oxidizer for making stable ammonia flame on the coaxial jet burner was decreased with increasing the thickness of the burner rim. When the thickness of the burner rim was set to 6.0 mm, three regions with different extinction mechanism of the ammonia coaxial jet diffusion flame were observed. Particularly, the flame extinction caused by the stretch of the flame was appeared under the conditions of high oxidizer velocity.