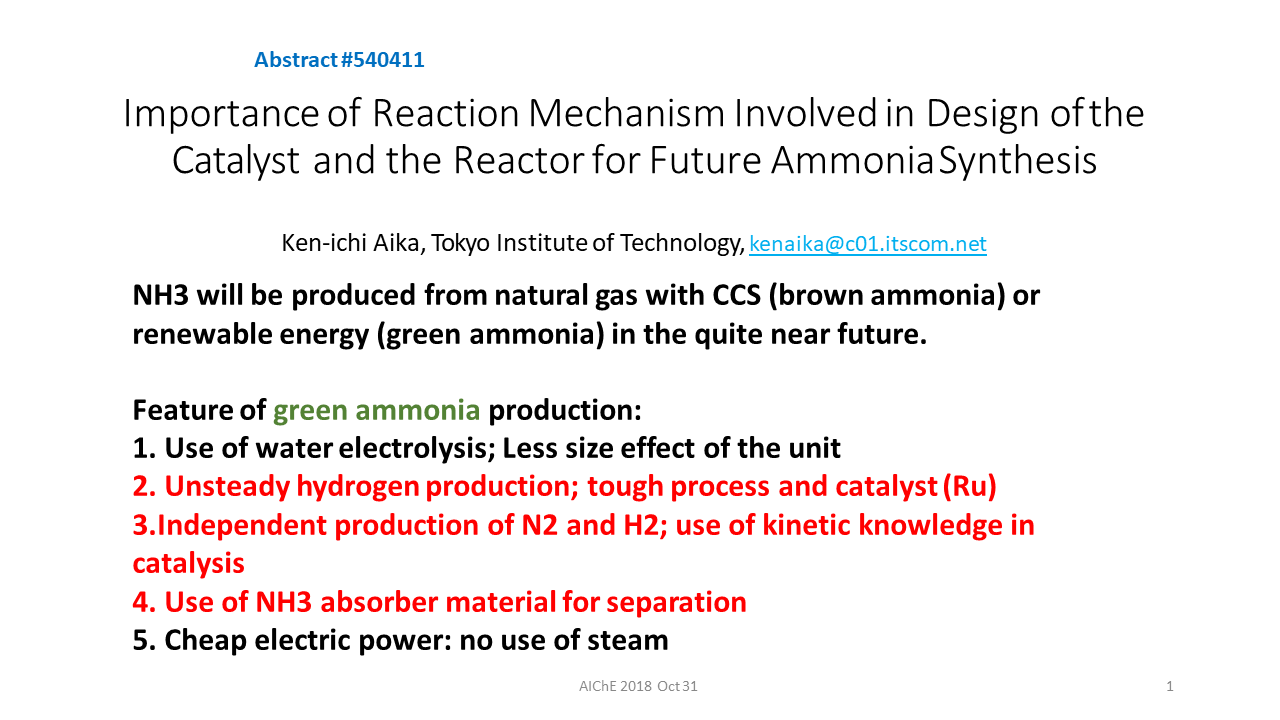 Here, the symbol ＊ indicates empty sites. For most metal catalysts, the dissociative adsorption of dinitrogen (step 1) is the rate-determining step, and all the other steps and its reverse step (from 2 to 6) are fast enough to be almost in equilibrium for each reaction step. The synthesis rate is considered to be the same as the rate for step (1), and is proportional to the dinitrogen pressure and square of the empty site concentration.

For iron catalysts, the main adsorbed species are simply N atoms, and the empty site concentration is given by [＊]= 1-θN, where θN is the surface coverage of N.

For ruthenium catalysts, dissociative adsorption is the rate-determining step, as with other metals, but adsorbed hydrogen has been found to retard the synthesis reaction. When both N(a) and H(a) retard dinitrogen activation, rate equation (10) is expressed instead as follows:
r = k1PN2 (1+ Kd PNH3/ PH21.5 + K2 PH20.5)-2 (11)

Here, K2 is the equilibrium constant for hydrogen adsorption (step (2)).

Thus character of the catalyst is expressed with the values of k1 (ability of N2 activation), Kd (strength of N adsorption), and K2 (strength of H adsorption). Active ammonia catalyst has high value of k1. Generally Kd is great at iron but low at ruthenium. On the other hand K2 is great at some ruthenium catalyst (strong hydrogen inhibition). The surface nature of ruthenium catalyst is strongly affected with the support and promoter. This is the reason why a lot of unique catalysts have been reported recently. The relation between promoter compounds and kinetic indexes shall be shown in this presentation.

These indexes are necessary for the reactor design and process operation (pressure, temperature, conversion, H/N ratio). If we can install different kind of catalysts, we can set a catalyst with great Kd at the reactor inlet part, but not at the outlet part where produced ammonia depress the rate by strong Kd. Such examples shall be shown.

Another interesting issue is whether the active synthesis catalyst can be the best decomposition catalyst or not. These problems shall be also discussed in this presentation.

Future ammonia production condition might be changed when renewable hydrogen is used. This kind of study must become important.