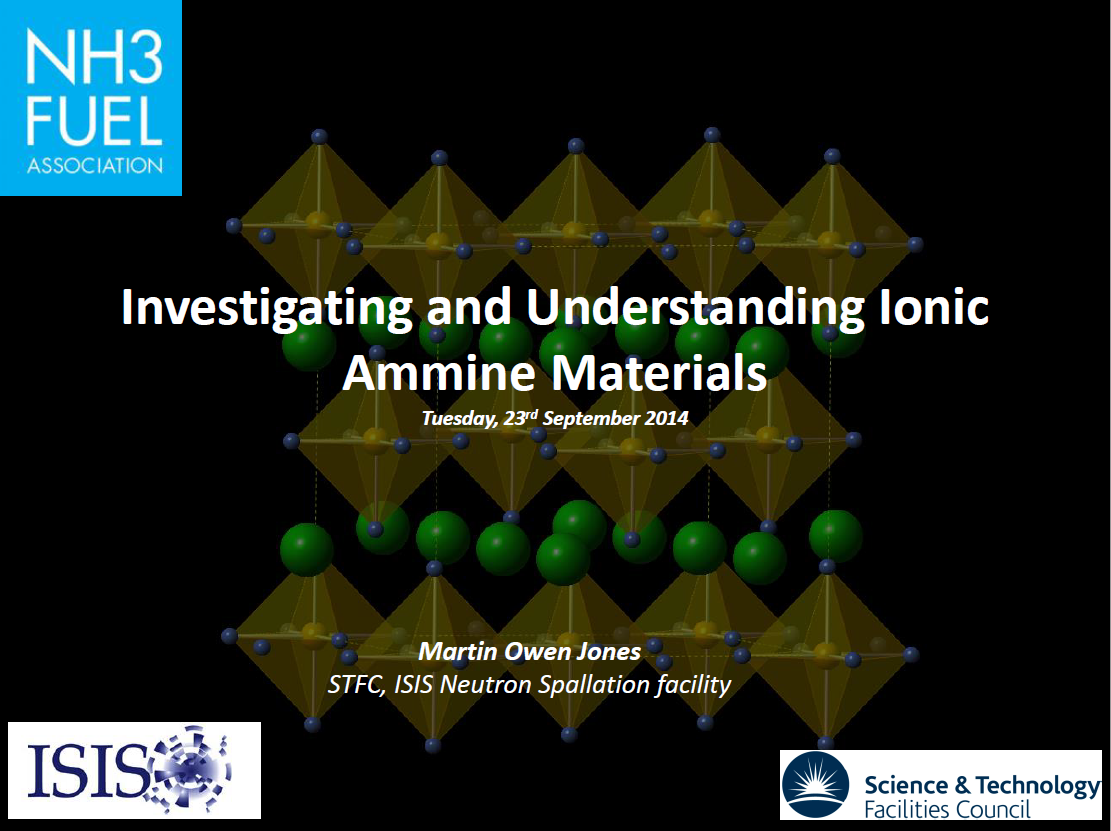 Ammonia has been promoted as a viable candidate as an indirect hydrogen fuel vector, due to its high hydrogen content (17.8 wt%) and its ability to store 30% more energy per liquid volume than liquid hydrogen [1]. Ammonia can be safely stored in very high gravimetric and volumetric density in solid state halide materials [2-3], for example, at 109 gL-1 for Mg(NH3)6Cl2 compared to 108 gL-1 for liquid ammonia. These solid state ammonia coordination complexes, known as ammines, have attracted much recent attention (for examples see [4-5] and references there within) with a view to their use as solid state ammonia and/or hydrogen storage materials. Solid state materials undergo considerable changes in structure and dielectric properties on coordination of ammonia due to changes in metal coordination environment and the presence of a partially hindered polar rotor.

We are interested in understanding the physical properties that determine the strength of ammonia binding within solids and the effect of ammonia coordination on structure [6]. To investigate these we have developed a new sample environment for use on the Polaris neutron diffractometer (at the ISIS neutron spallation source) that allows the simultaneous characterisation of structure and dielectric properties whilst measuring ammonia uptake through mass flow measurements and out-gas mass spectroscopy. The combination of these characterisation techniques allows us to correlate the structure and coordination environment with dielectric properties, measure the kinetics of ammonia uptake and develop a greater understanding of ammonia absorption processes. Here we discuss our recent research on group 1 and group 2 halide ammines, expound a simple ionic model that can be used to predict absorption and desorption temperatures and describe the results of our preliminary multi-characterisation experiments on the Polaris diffractometer at the ISIS neutron spallation facility.