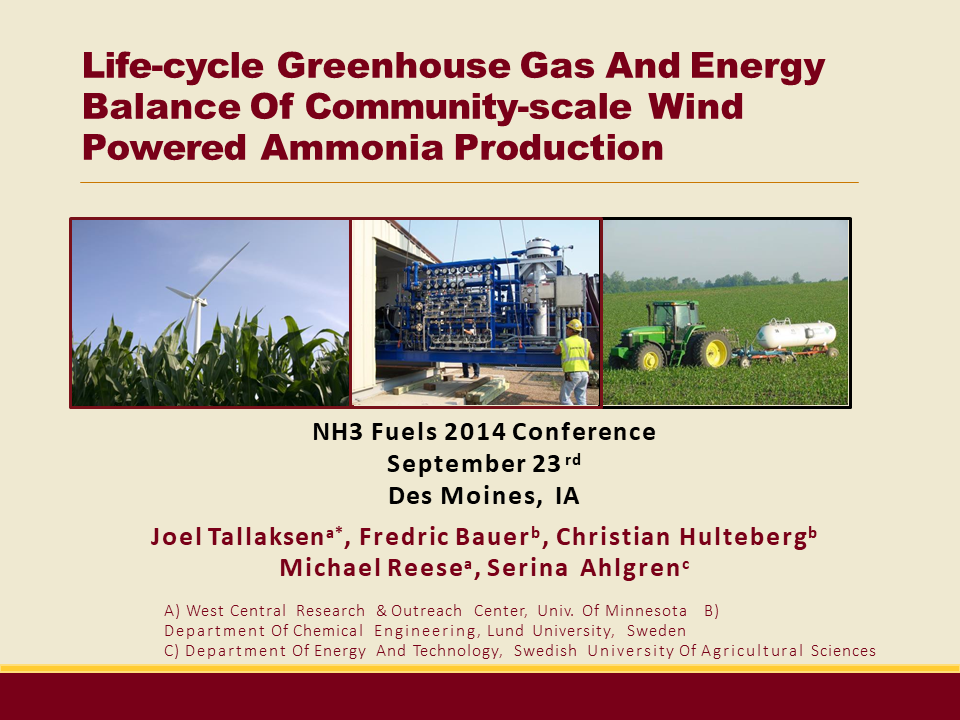 As well as being an innovative energy source, ammonia is a crucial component of most nitrogen fertilizers. Since the production of ammonia is very energy intensive and currently completely based on fossil energy, there is a considerable interest in developing renewably produced ammonia for use in agriculture and other sectors. This work presents a life cycle assessment (cradle-to-gate) of greenhouse gas (GHG) emissions and primary energy use for ammonia produced at community-scale using renewable wind generated electricity. Two different regions were studied: Minnesota (US) and Sweden. The results show that ammonia produced with wind-generated electricity has significantly lower fossil energy use and associated GHG emissions than conventionally produced ammonia.

However, the system is partially reliant on power from the grid due to the intermittency of the wind resource. The environmental metrics analyzed were significantly influenced by technologies producing that background grid power. In Minnesota’s coal dependent grid system, the reductions in primary fossil energy use and GHG emissions when using the renewable production system are not as significant as in the hydropower and nuclear reliant Swedish systems. In a scenario where 25% of electricity is purchased from the Minnesota grid, emissions were even higher than the reference natural gas based ammonia. The current dependence of the renewable ammonia production system on the background grid system makes it crucial to study in detail how the ammonia production process is integrated in the regional energy system. Optimizing the ammonia production system to use less grid power would further reduce fossil energy use and GHG emissions. This would be especially important in ammonia fertilizer consuming regions, such as Minnesota, that heavily rely on fossil fuels in their electrical production grids.