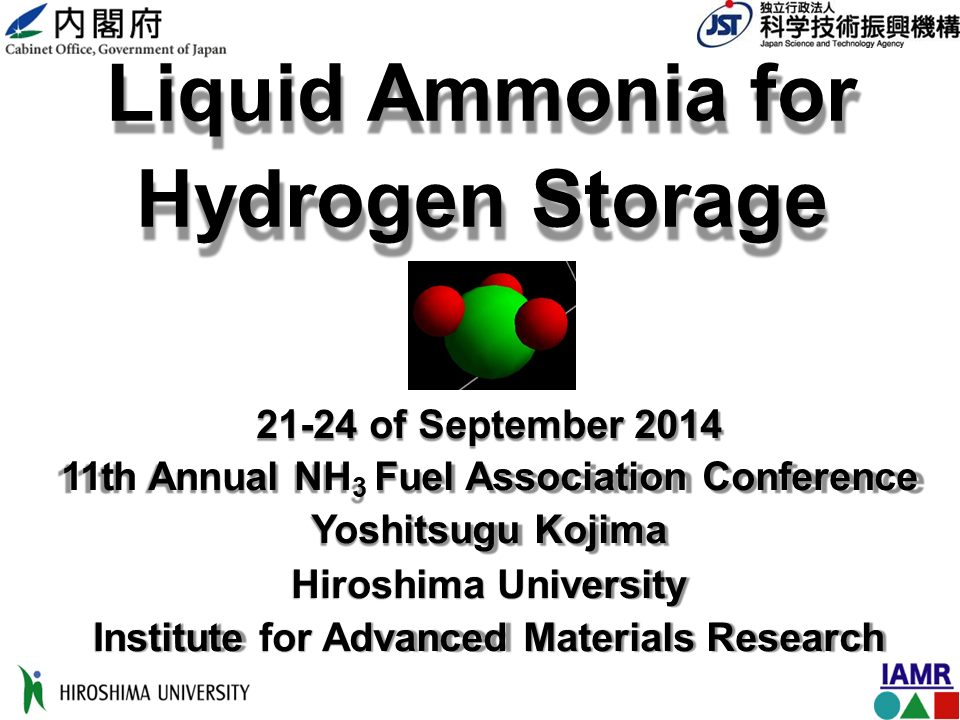 Hydrogen storage and transportation technology is essentially necessary to realize hydrogen economy. Hydrogen can be stored in many different forms, as compressed or liquefied hydrogen in tanks, or as hydrogen carriers: a hydrogen-absorbing alloy, metal hydrides with light elements, organic hydrides and carbon-based hydrogen storage materials. Among them, solid-state hydrides with light elements such as MgH2, Mg(BH4)2 and NH3BH3 possess high hydrogen capacity, 7-20 mass%, However, the practical volumetric H2 density is below 8 kgH2/100L because the packing ratio is down to 50%. Ammonia is easily liquefied by compression at 1 MPa and 25°C, and has a high volumetric hydrogen density of 10.7 kg H2 /100L. The volumetric hydrogen density is 1.5 times of liquid hydrogen at 0.1MPa and -253°C. The vapor pressure of liquid ammonia is similar to propane. Moreover it has a high gravimetric hydrogen density of 17.8 mass%. Ammonia is burnable substance and has a side as an energy carrier which is different from other hydrogen carriers. The heat of formation of ammonia is 30.6kJ/molH2. The value is about 1/10 of heat of combustion for hydrogen. Ammonia has also advantages in cost compared with H2 and convenience as a hydrogen energy carrier for fuel cell vehicles, solid oxide fuel cell (SOFC), gas turbines of electric power plants and engines of air crafts, ships and trucks, although it is deleterious substance. Power to ammonia is a promising technology which converts renewable energy to liquid fuel.