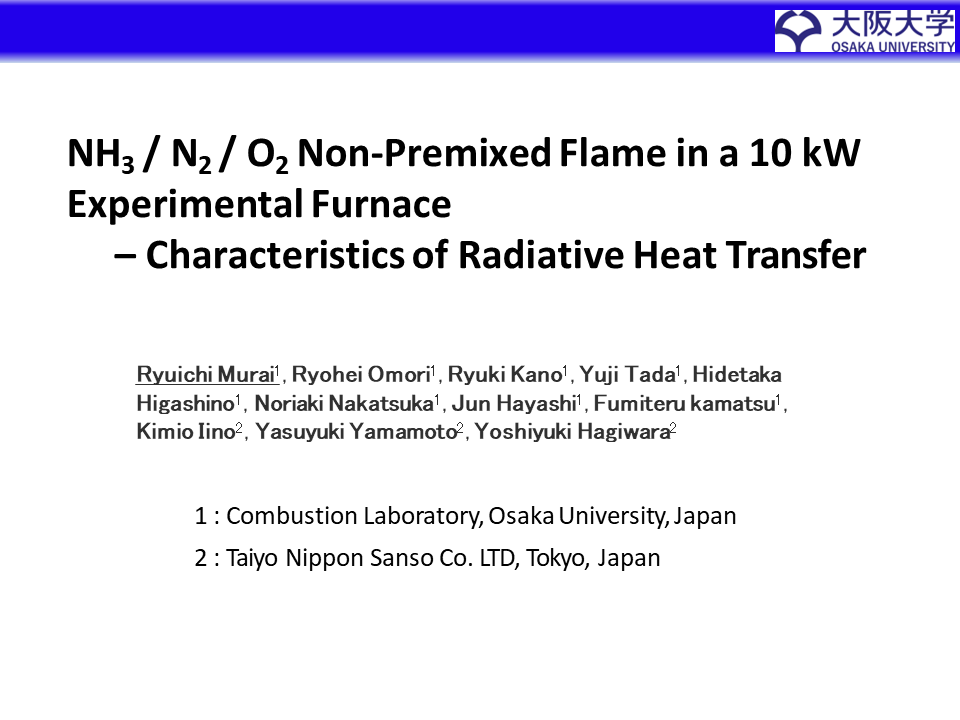 There are severe issues on increasing amount of carbon dioxide (CO2) emission in the world. Many studies are devoted on alternative fuels. One of superior candidates is the utilization of hydrogen energy which can realize a low-carbon and hydrogen-based society. Ammonia might play an important role which is zero emission of CO2, and is useful for hydrogen energy carrier as a clean energy. Additionally, ammonia is an easily-liquefiable fuel with pressure of about 0.86 MPa and temperature of 293 K. Commercially, ammonia is produced in large quantity by the Haber–Bosch process. It is also to be produced by using catalyst with renewable energy sources, such as wind energy and solar energy.

The ammonia has advantages to be used as an alternative fuel. The thermo-physical properties of an ammonia fuel are similar to those of propane. Lower heating value of ammonia is 3358 (kcal/m3N). Although it is smaller than that of methane (8557 (kcal/m3N)), it is larger than that of hydrogen (2570 (kcal/m3N)). Therefore, the ammonia has a possibility to be employed directly to industrial furnaces, gas turbines and reciprocating engines as a fuel. Also, the ammonia does not emit CO2 during its combustion process. A large amount of CO2 reduction is expected in case of introducing an ammonia gas as a fuel to boilers and industrial furnaces.

However there are two main issues applying ammonia combustion as a fuel to boilers and industrial furnaces. First, ammonia doesn’t contain carbon atoms, which results in emitting less radiative heat flux than methane combustion because of lack in CO2 and soot. Secondly, fuel-NOx emission is particular concern, because the ammonia molecule contains nitrogen atom itself as fuel-N.

In this situation, we established the 10kW experimental furnace to study the radiative heat flux, the radiation spectra and NOx emission under the condition of the ammonia fuel combustion and the oxygen enriched ammonia combustion.

The furnace is 1400 mm long and its inner wall is surrounded with the adiabatic material. On a top of the furnace there are six ports equipped with thermocouples. On a bottom of a furnace, there also are six ports for measuring heat flux and emission spectrum from the inner wall and the flame. For the thermal emission spectrum measurement, we installed the spectrum detector instead of the heat flux detector. Therefore, we can compare heat flux data with spectrum ones at the same position. We introduced fuels and oxidizers using mass flow controllers to the banner of which burner nozzle had coaxial double tube and fuel flows through the center tube and oxidizer flows through its outer tube. This structure generated the coaxial jet flame in our experimental furnace. The heat flux detector, of which detection area is a circular shape with a diameter of 10 mm, can eliminate the heat convection and only measure the radiative heat flux.

The results that became clear in this study were shown below: