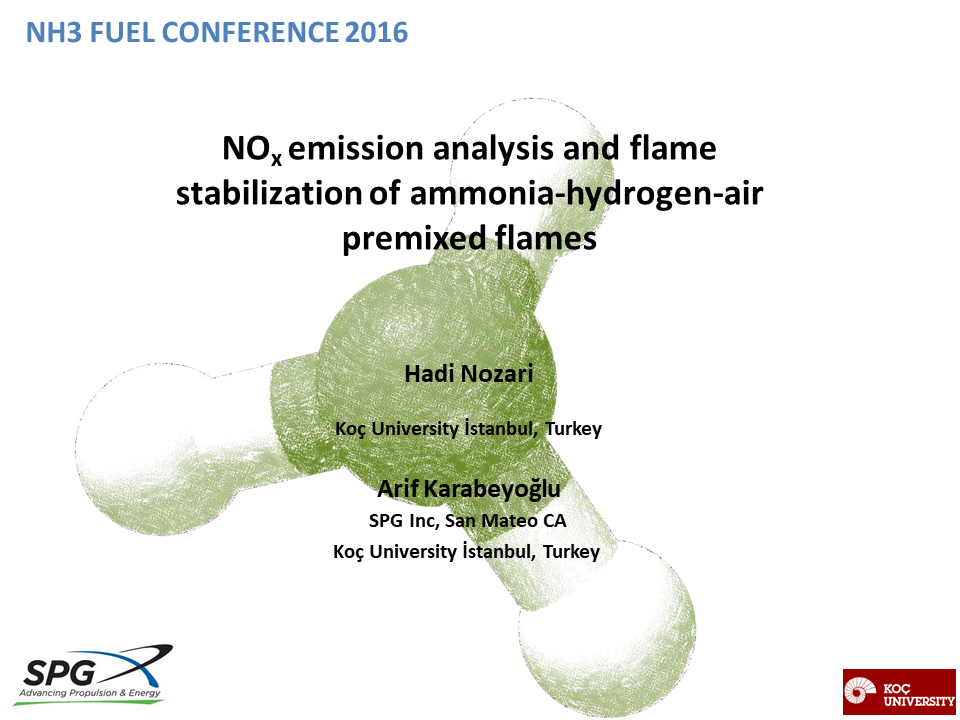 Based on its well-known merits, ammonia has been gaining special attention as a potential renewable energy carrier which can be replaced in power generation units. One of the major challenges with ammonia as a fuel is NOx emission, which has a complex underlying chemical kinetics.

In an earlier chemical kinetics study by the authors, NOx formation sensitivity was thoroughly studied in a wide range of combustion conditions [Nozari & Karabeyoğlu, J.Fuel 2015]. As the next step, premixed ammonia-hydrogen-air flames are studied experimentally in standard temperature and pressure condition. Effects of some major influential parameters on NOx emission levels are investigated: equivalence ratio, ammonia mixture fraction, and temperature. NOx formation behavior as well as temperature profiles are analyzed in comparison with chemical kinetics results. We also apply SiC porous block as a practical and effective medium for ammonia-hydrogen flame stabilization as well as a promising way of reducing NOx. Proven to be an effective way of flame stabilization in some other fuels (eg, methane and hydrogen), it enhances the heat, momentum and mass transfer, increasing the flame speed which is specifically helpful for better stabilization of the flames with high ammonia fraction in the mixture. In addition, the high thermal conductivity of SiC porous blocks elevate the heat conduction from the flame zone to pre- and post-flame zones which accordingly decrease the thermal NOx due to the lower flame temperature.