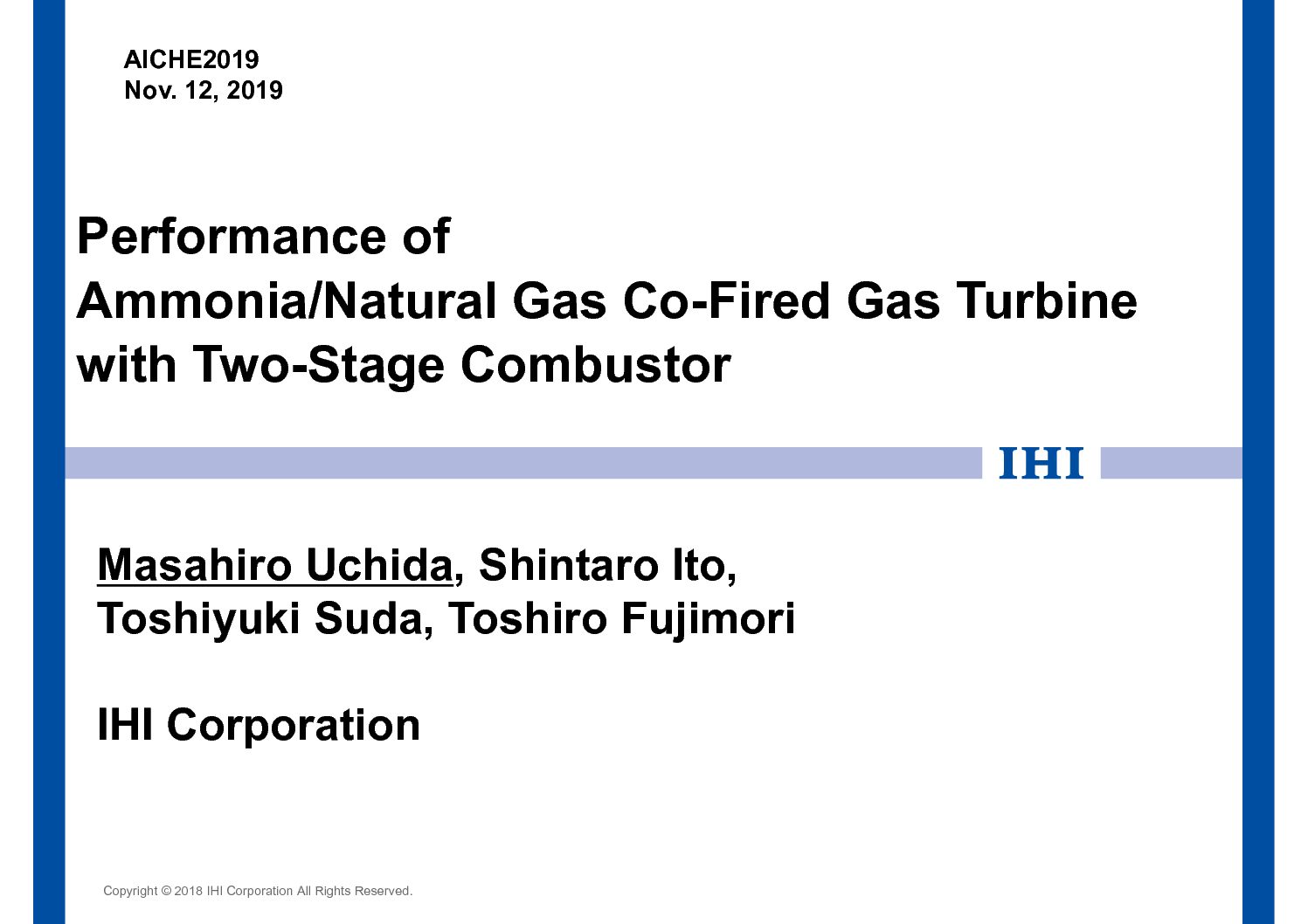 Ammonia has several advantages as renewable energy career [1-3]. Regarding the manufacturing process, the Harbor-Bosch method is already established. For transportation, ammonia can easily be liquefied at room temperature. Therefore, both transportation and storage are much easier than in case of hydrogen. In utilization, ammonia is combustible and used as a carbon-free fuel. However, ammonia has different combustion characteristics from natural gas. For example, the nitrogen atom contained in ammonia molecule causes high NOx emission through fuel NOx mechanisms [3]. Laminar burning velocity of ammonia is much lower; it might increase unburnt ammonia emission and cause unstable operation of gas turbine. Much effort has been made to overcome these points and establish stable low NOx combustion methods [4-10]. Among these, combustion methods for pure ammonia developed by Hayakawa et al. showed characteristic effects on NOx emission [9, 10]. These results showed that NOx emission became the smallest around primary zone equivalence ratio of 1.2 in a two-stage premixed combustor. However, this method has the risk of flashback in real gas turbine operation near stoichiometric condition. Therefore, in this study the effect of primary zone equivalence ratio is examined for a diffusion flame burner which co-fires ammonia with natural gas. Secondary ammonia injection was adopted in the demonstration tests as a means of low NOx combustion for ammonia / natural gas two-stage combustor [11, 12]

For the demonstration, IM270, a simple cycle gas turbine manufactured by IHI Corporation [13], was used. Figure 1 and 2 show photos of gas turbine engine test equipment and schematics of two-stage combustor with diffusion flame burner, respectively. The test system consists of Selective Catalytic Reduction (SCR) unit, natural-gas compressor and high pressure ammonia supply unit. The high pressure ammonia supply unit first pressurizes ammonia to 2 MPaG and then gasifies it in a steam vaporizer, before releasing it to the combustor. In engine testing, the gas turbine is first started and then power is increased up to 2 MWe power generation output firing natural gas, before ammonia is supplied to the combustor. Ammonia supply to the engine is measured in terms of the heat input ratio of ammonia to total fuel. This ratio is called gammonia mixing ratioh in this study. Operation of the gas turbine engine turned out to be stable in the whole range of ammonia mixing ratios from 0 to 25% with diffusion flame burner. Primary zone equivalence ration of diffusion flame burner was set to 0.85. This value is closer to stoichiometric condition than that in lean premixed burner used in the past studies [12]. 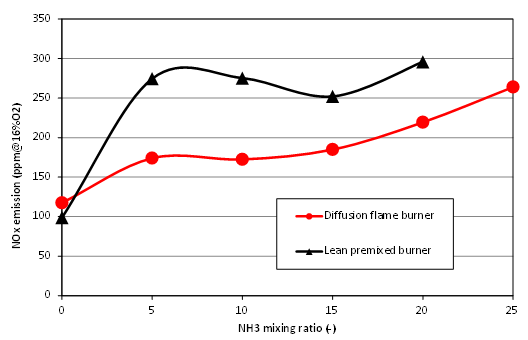