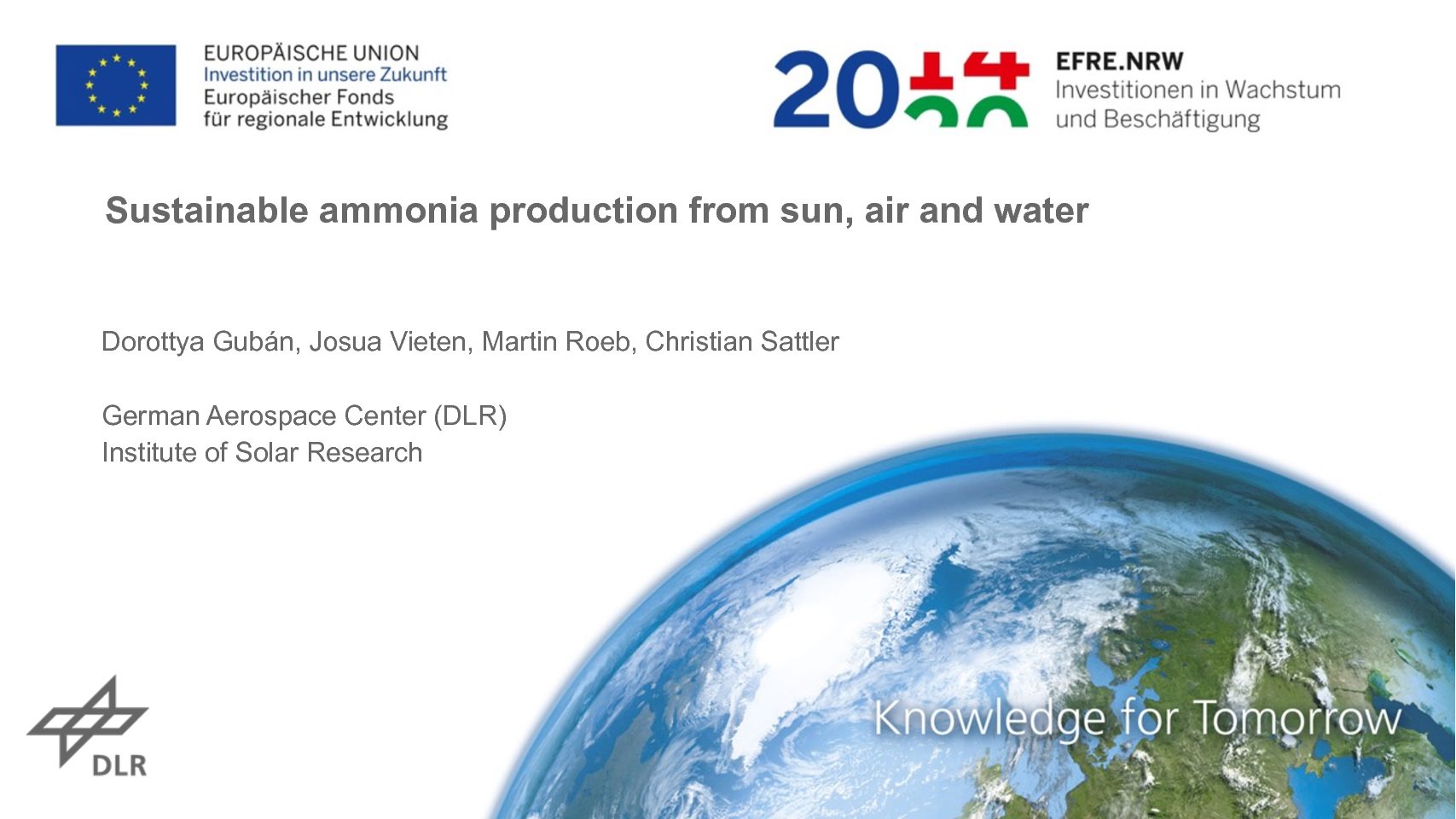 There is an ever growing demand for ammonia production that already reached globally 200 million tons per year by 2018 and is forecasted to increase to over 350 million tons per year by 2050 [1]. The application segment is dominated by the fertilizer industry, since the most important fertilizer and the world’s most widely produced chemical is urea. Ammonia is synthesized via the Haber-Bosch process, for which the required hydrogen and nitrogen are currently provided by using fossil fuels. This work proposes a novel approach to produce ammonia from the raw materials water and air only by utilizing solar energy directly.

The solar ammonia production route consists of two coupled solar-heated thermochemical cycle processes, which aim to specifically remove oxygen from gases. This applies both to gases (oxides containing molecular bound oxygen like water vapour), as well as for oxygen molecules-containing gas mixtures (air). The applied redox material is used in a two-stage process, first oxidised by the corresponding gas, and then thermally reduced. The energy required for this is provided by concentrated solar radiation that has the potential to play a major role in the future global energy mix.

In the first cycle, H2O is used for oxidation and hydrogen is produced. This process has already been successfully tested by DLR on a pilot scale. [2] The second innovative cycle uses air as the oxidant. The air is deprived of oxygen and thereby pure nitrogen is produced. Both gases together, N2 and H2, are subsequently converted to ammonia in the well-established Haber-Bosch process.

The focus of the current work is the unexplored solar thermal air separation for the production of nitrogen for the Haber-Bosch process, which requires N2 with oxygen contamination below 10 ppm. During thermochemical reduction-oxidation (redox) cycles the redox material (typically metal oxide) is thermally reduced at high temperature while heat is converted to chemical energy in an amount equal to the enthalpy of the reduction reaction, and with the release of gaseous oxygen. During the reduction step this stored energy can then be converted back to heat by the reverse reaction to drive the air separation step for N2 production. The absorbed O2 during the oxidation step could later be released and utilized for fertilizer production, e.g. in the Ostwald process for ammonium nitrate synthesis.

Perovskites are promising redox materials that are described with the general formula AMO3-δ, where the A site typically features an alkali, alkaline earth or rare earth metal cation, whereas the M site is occupied in most cases by transition metal cations. The occurrence of an oxygen non-stoichiometry δ (δ = 0–0.5) in AMO3-δ perovskites, as well as the close structural relationship between perovskites and their defect-ordered reduced form A2M2O5 (brownmillerite) allow for fast redox kinetics. Furthermore, the partial reduction that is described by Eq. 1 ensures the stability of these materials since during the redox cycle oxygen moves through the lattice without a decomposition of the crystal structure.

Another advantage of perovskites is their tuneable composition, since the A and M sites can be occupied by a number of ions. The possible formation of a given composition is limited by the Goldschmidt tolerance factor [3]:

In most cases, the perovskite forms the desired ideal cubic lattice if 1 < t < 1.02 is fulfilled. The tolerance factor can be controlled by selecting the required alkali metal on the A site, while the B site can be occupied by a number of transition metals with the possibility of adding other metals in small quantity. With this method the reduction enthalpy can be tuned in the range of ΔH0 = 100-500 kJ/mol-1.

The selection of the metal ions was based on the rule that the oxygen affinity of the material should be low enough to allow thermal reduction in air at moderate temperatures, but high enough to enable full re-oxidation of the reduced form to its initial state in air. A measure of the reducibility of an oxide is its reduction enthalpy (ΔHred), e.g. a lower ΔHred results in a lower reduction onset temperature.

In this work the feasibility of using perovskites as redox materials for solar thermochemical air separation is demonstrated. The choice of the applied redox material SrFeO3-δ is based on our previous results. [4]Furthermore, the raw materials to make SrFeO3-δ, strontium carbonate and iron oxide are very inexpensive, due to abundant natural resources at world market prices below $1 per kg, allowing for economical use as a redox material. The concept is first validated in laboratory-scale experiments performed in an IR heated furnace, followed by scaling up the process to a 20 kW solar reactor.

SrFeO3-δ was synthesized by a solid state reaction between the raw materials, strontium carbonate and iron oxide. In order to ensure the smooth transfer of the material as well as to avoid fine dust formation the reactor 2-3 mm spherical particles were prepared by mixing-spheronization method. In the laboratory scale tests 50g of the synthesized beads were packed in a fixed bed reactor heated via infrared radiation in gas flows of synthetic air and nitrogen while the oxygen content of the outlet gas was monitored continuously. The process was demonstrated in a 20 kW scale solar rotary kiln with 2000 g of redox material. The designed reactor was first tested by heating it up with a solar simulator by using xenon lamps, then after filling the reactor with the redox material the particle bed was heated by the solar furnace of DLR in Cologne.

The laboratory scale experiments showed that after the high temperature reduction step, when oxidation begins, the outlet oxygen concentration drops to a value of approximately 3 × 10−6 bar for some time, giving an outflow of purified nitrogen with low oxygen impurities, from the gas entering the system with 20% oxygen. As the oxidation progresses, the oxygen vacancies in the material become filled and it slowly loses capability to remove oxygen at low concentrations, so that the outlet concentration increases over time.

To investigate cycle stability of the material, five cycles were performed at identical thermal conditions of 800 ºC reduction and 350 ºC oxidation for air purification. An additional five cycles were performed at identical conditions but with an inlet gas of 1% oxygen in a 500 sccm nitrogen flow. This is of interest as the SrFeO3 cycle alone would be a rather energy intensive route to producing nitrogen, but coupling it with an already established technology for producing low purity nitrogen, such as a pressure swing adsorption unit, could offer a very efficient route to removing the remaining trace oxygen and producing high purity nitrogen. The production versus purity relationships for each cycle is given in Fig. 1. The narrow grouping between curves of different cycles shows the excellent repeatability of the process and lack of degradation of the material, at least over the limited number of cycles performed. 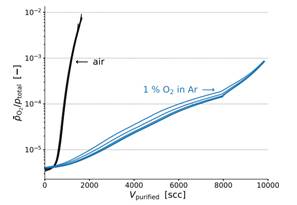 Fig. 1 Production curves for five identical purification trials from both synthetic air and from a mixture with 1% O2. Reproduced with permission from [5].

A solar rotary driven kiln was designed and built to demonstrate the air separation process in larger scale with ca. 2000 g redox material. The proposed reactor scheme is shown in Fig 2. The reduction temperature (800 ºC) is reached by concentrated sunlight.

Fig. 2 Scheme of a solar rotary kiln for air separation.

In the DüSol research project, the technology of sustainable fertilizer production is developed and demonstrated on the basis of solar thermal redox cycle processes. The focus is on the unexplored step of solar thermal air separation for the production of nitrogen. For this reaction, corresponding materials are identified by thermodynamic calculations and qualified and optimized on a laboratory scale. In combination with material development, a prototype reactor is designed based on computer-aided calculation tools. In a test campaign this reactor is being tested and the solar thermal nitrogen production demonstrated. These experimental works go hand in hand with the overall process simulation and optimization, which lead to a comprehensive economic analysis.