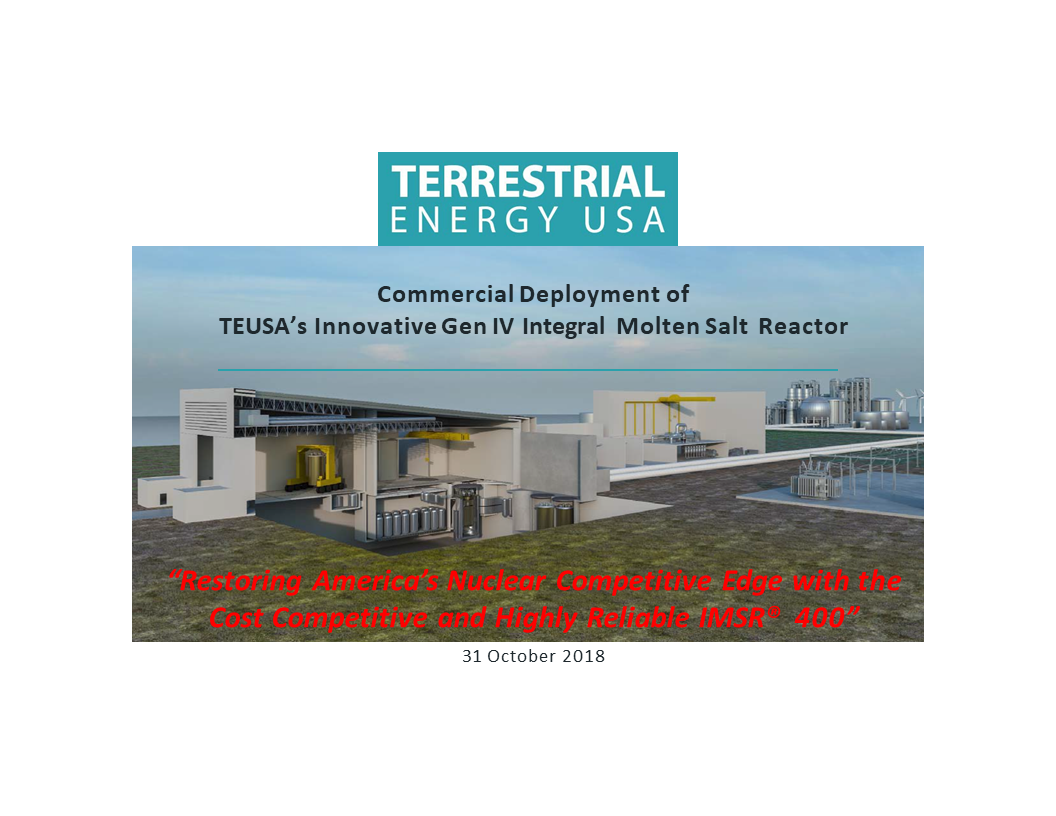 Demands for safe secure supplies of potable water across the planet are increasing faster than can be provided by natural, ever depleting sources of fresh water. At the same time, world demand for electric power is also accelerating. Making H2 from Natural Gas is not an optimal or efficient process that is also un-economic at higher gas costs. An Integral Molten Salt Reactor (IMSR) is uniquely suited to provide the very high temperatures (585 °C+ working temps.) that are needed to both generate significant amounts of Hydrogen, Oxygen (a feed for industrial oxygen uses) and Electricity needed for advanced economies and industry.

Terrestrial Energy USA, Savanna River National Lab, Sandia National Lab, Idaho National Laboratory, and Southern Company are working to show that this new generation of IMSR would be the only effective system to create an H2 supply utilizing the HyS system to produce Hydrogen. The Hybrid Sulfur (HyS) Hydrogen Generation process has the potential to produce hydrogen gas using both thermal and electrical energy at a cost of <$2/kg.

Analysis by INL and Terrestrial USA have shown that IMSR is uniquely suited to be coupled to a pure H2 production from HyS. Deep de-carbonization of Process Heat, H2 production and power demands could both be served by a carbon free source of inherently safe, clean, non-proliferating energy. Other findings of the work studies show that in addition to performing very well with H2 leading to Ammonia production, there are many other IMSR H2, O2 / Energy production combinations available that can be tailored to each application and industry need. The ability to immediately dispatch heat energy to where it is needed is a specific trait of the IMSR.

With an unequaled, walk away safe source of compact, efficient, very high temperature process heat, coupled with the latest industrial systems, Terrestrial Energy USA, working with United States Industry and National Labs, can be the catalyst for an vastly expanded NH3 Industry with the H2, O2 and power needed to make an industrial economy flourish.