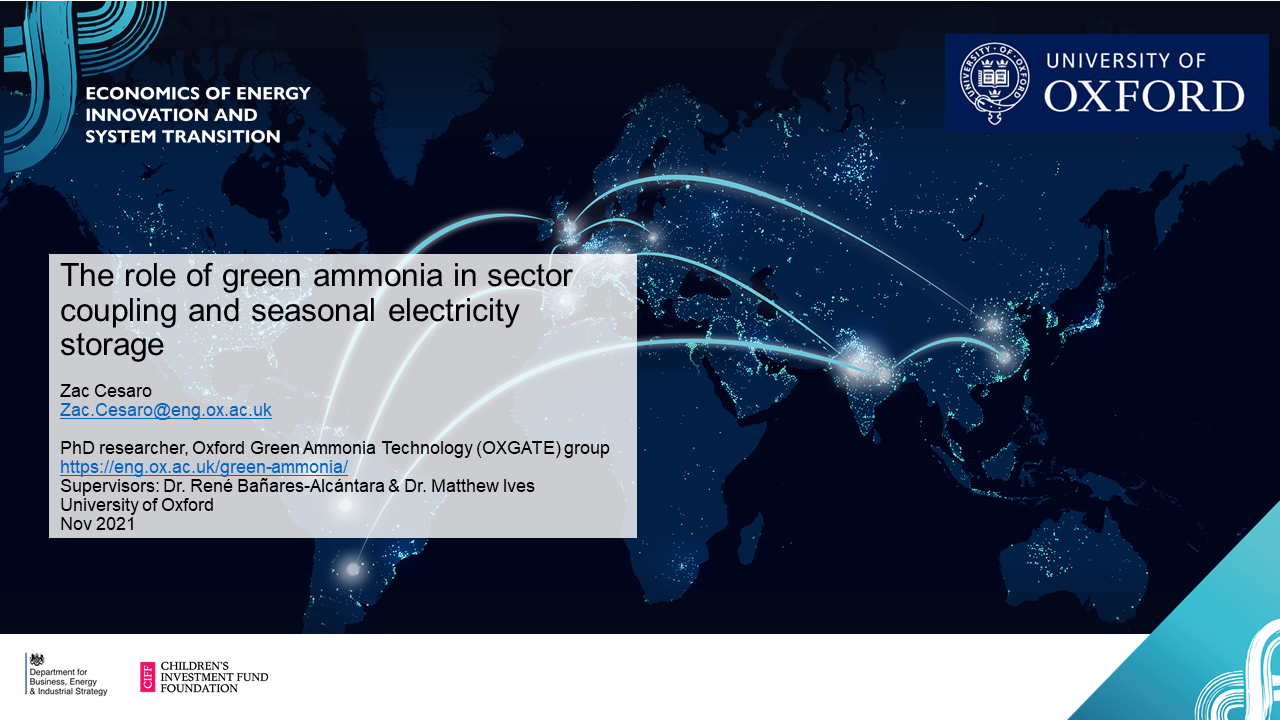 Green ammonia (NH3) will have a versatile role in the decarbonisation of large sectors of the global economy. Of these sectors green ammonia will likely have the most competitive potential in decarbonising long-duration energy storage, regional energy and hydrogen transport, shipping propulsion fuel, and replacing existing brown ammonia production for fertiliser and other chemicals. In this presentation, we introduce our modelling on the cross-sector integration of green ammonia into large-scale energy systems, with a case study of India.

In the power sector, ammonia may play a role in seasonal storage, system resilience, and electricity import/export. We co-developed the world’s first roundtrip (power-to-ammonia-to-power) demonstrator, built in Oxfordshire, UK in 2018 with Siemens. Building on this demonstration, our research investigates the role that green ammonia could have in future decarbonized electricity systems via levelized cost models of power-to-ammonia-to-power. We find that in high renewable penetration scenarios power-to-ammonia-to-power can become competitive with other, more conventionally modelled low carbon technologies, such as dispatchable electricity generation from nuclear or fossil fuels with CCS. Importantly, ammonia is more scalable and geographically independent than hydrogen storage, which requires underground salt or rock cavern storage to be scaled up to useful energy storage.

Secondly, the results from energy system models (ESM) are presented which have been developed to integrate ammonia into dispatch and capacity expansion models of the electricity systems of India to 2050. The interplay between production, storage, and use for different sectors is explored. In the modelled scenarios, the role of green ammonia is explored for fertiliser production, maritime fuel production, and long-term electricity storage. India is an ideal case study for exploring seasonal energy storage needs and sector coupling due to the monsoon seasonality and large domestic fertiliser demand.