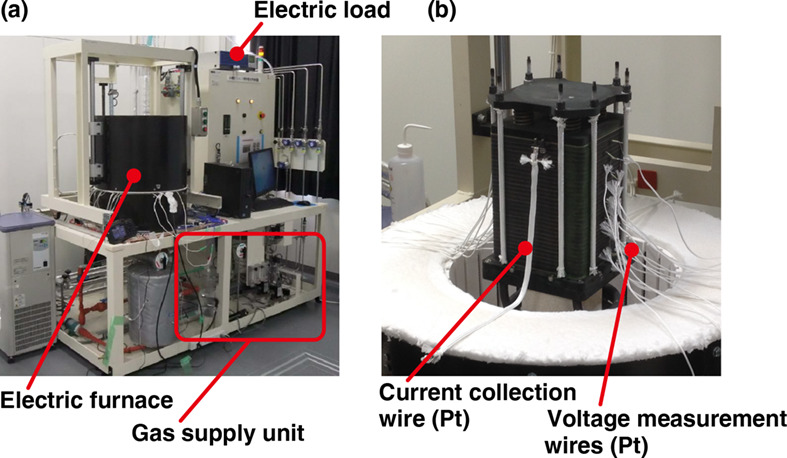 By Stephen H. Crolius on March 05, 2020
A steady stream of Japanese news reports over the last several months attest to the country’s progress in deploying fuel cells in the built environment. Dubbed “Ene-Farms,” the appliances function as micro-scale combined heat and power units, providing electricity as well as heat for domestic applications. Most of the Ene-Farms deployed so far feature proton-exchange membrane (PEM) technology (which requires high-purity hydrogen). However, two recent developments show that solid oxide fuel cell (SOFC) technology (well suited for ammonia) could play a role, maybe even a large role, in Japan's Hydrogen Society. 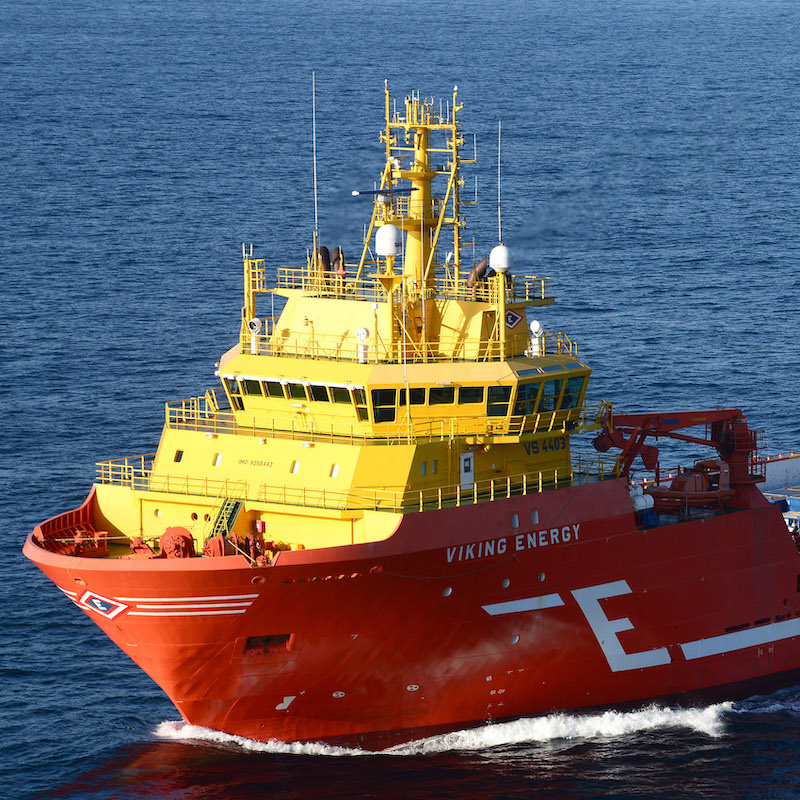 Viking Energy to be retrofit for ammonia fuel in 2024

By Trevor Brown on January 23, 2020
This morning, it was announced that the "Viking Energy," a supply vessel for Equinor's offshore operations, will be modified to run on a 2 MW direct ammonia fuel cell. This will be a five year project: the technology will be scaled-up on land before being installed on the vessel, which will begin a year of GHG emission-free operations in 2024. The Norwegian partners leading this "world's first" project include shipowner Eidesvik, contractor Equinor, and ammonia producer Yara, as well as Wärtsilä (Wärtsilä Norway), responsible for power technology and ammonia storage and distribution systems, and Prototech, delivering the fuel cell system. 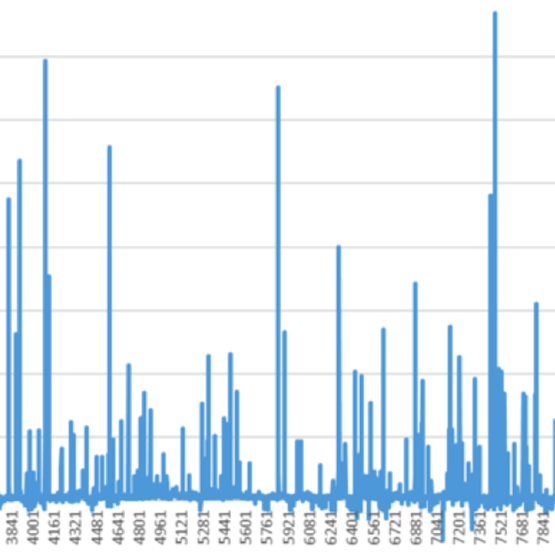 By Trevor Brown on January 16, 2020
Yesterday, Tri-State Generation & Transmission Association launched its "transformative" Responsible Energy Plan, which will "dramatically and rapidly advance the wholesale power supply cooperative’s clean energy portfolio." Last week, the utility announced the retirement of its last coal-fired power plants in New Mexico and Colorado. These two announcements provide context for a presentation at the Ammonia Energy Conference in November 2019, entitled Market Integrated Ammonia. Its conclusion — highly relevant for a utility that is closing its coal plants and increasing renewables to 50% by 2024 — is that in a wholesale electricity market with increased volatility, renewable ammonia could be produced at the extremely low cost of $96 per tonne. 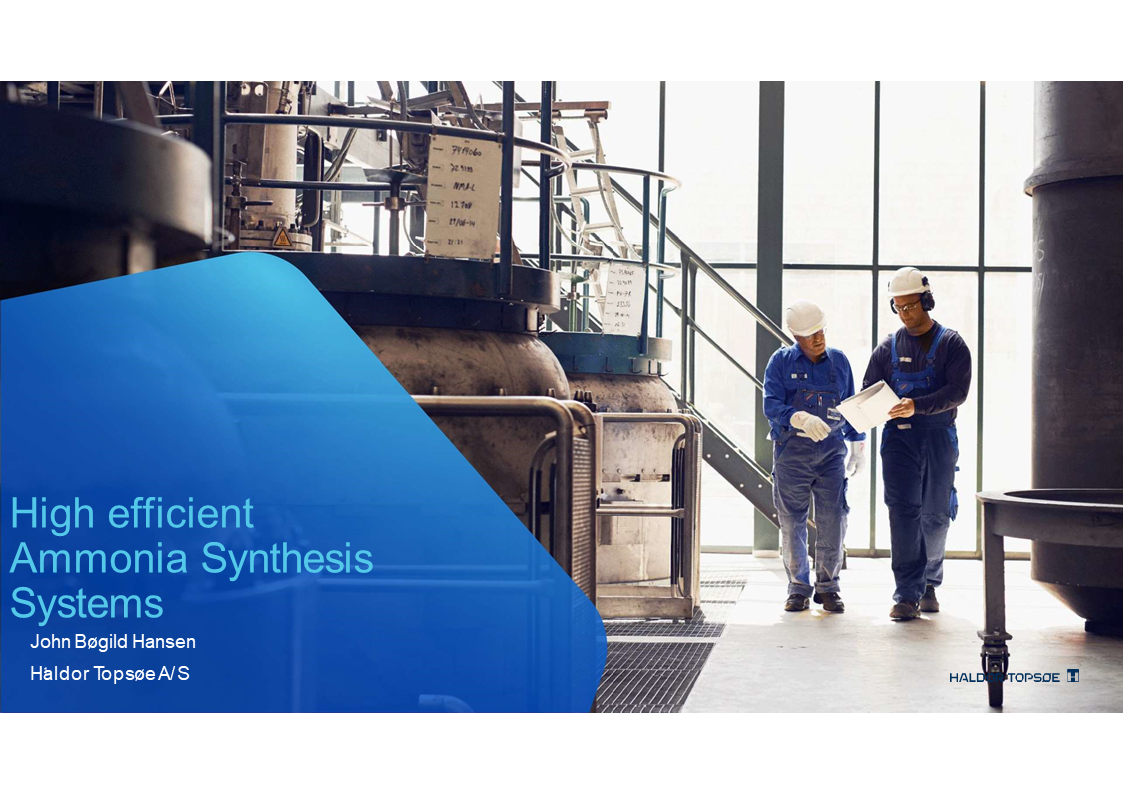 By John Bøgild Hansen on August 22, 2019
Haldor Topsøe A/S has developed a new technology for generation of ammonia synthesis gas via Solid Oxide electrolysis, which eliminates an air separation unit and has 20-30 % lower power consumption than traditional electrolysis based processes. The concept will be demonstrated in a 50 kW unit along with test of ammonia as fuel for Solid Oxide Fuel Cells. The partners in the project are: Vestas, Ørsted, Energinet, Aarhus University and DTU, and it is sponsored by the Danish Energy Development Programme. 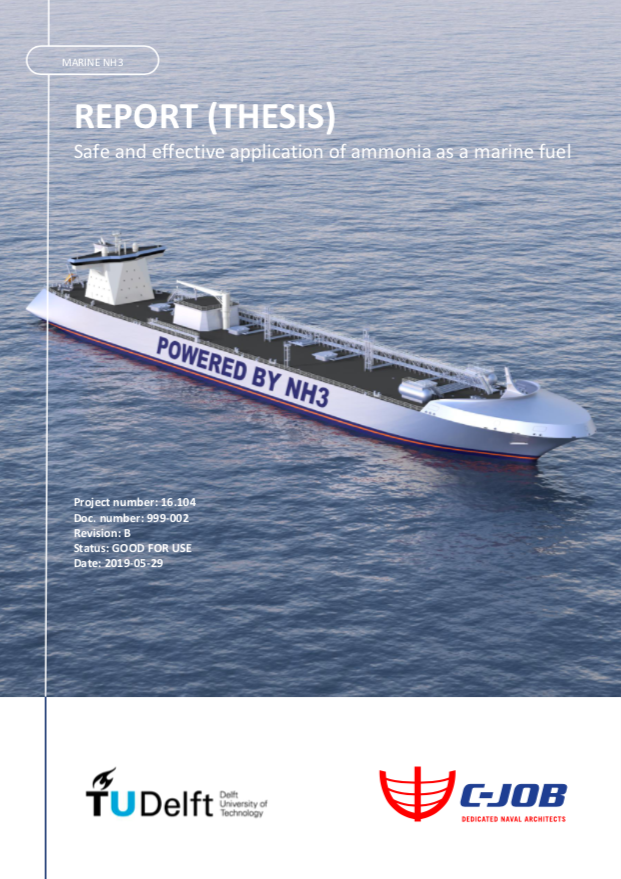 By Stephen H. Crolius on August 07, 2019
In mid-June the Dutch naval architecture firm C-Job released "Safe and effective application of ammonia as a marine fuel," a thesis written by the firm’s Lead Naval Architect Niels de Vries for the Marine Technology Master of Science program at the Delft University of Technology in the Netherlands. While the thesis delivers an extensive assessment of ammonia's potential effectiveness as a marine fuel, it breaks new ground in its consideration of ammonia's safety in this context. 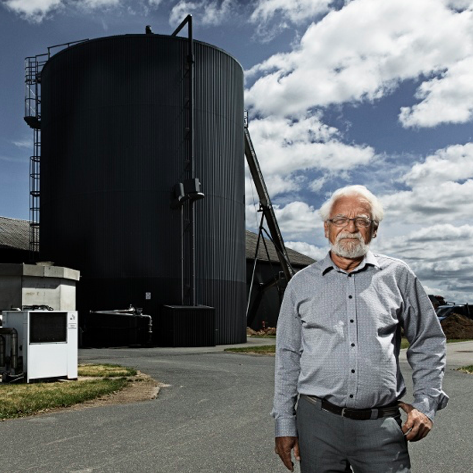 By Trevor Brown on March 29, 2019
Haldor Topsoe has greatly improved the near-term prospects for green ammonia by announcing a demonstration of its next-generation ammonia synthesis plant. This new technology uses a solid oxide electrolysis cell to make synthesis gas (hydrogen and nitrogen), which feeds Haldor Topsoe's existing technology: the Haber-Bosch plant. The product is ammonia, made from air, water, and renewable electricity. The "SOC4NH3" project was recently awarded funds from the Danish Energy Agency, allowing Haldor Topsoe to demonstrate the system with its academic partners, and to deliver a feasibility study for a small industrial-scale green ammonia pilot plant, which it hopes to build by 2025. There are two dimensions to this technology that make it so important: its credibility and its efficiency. 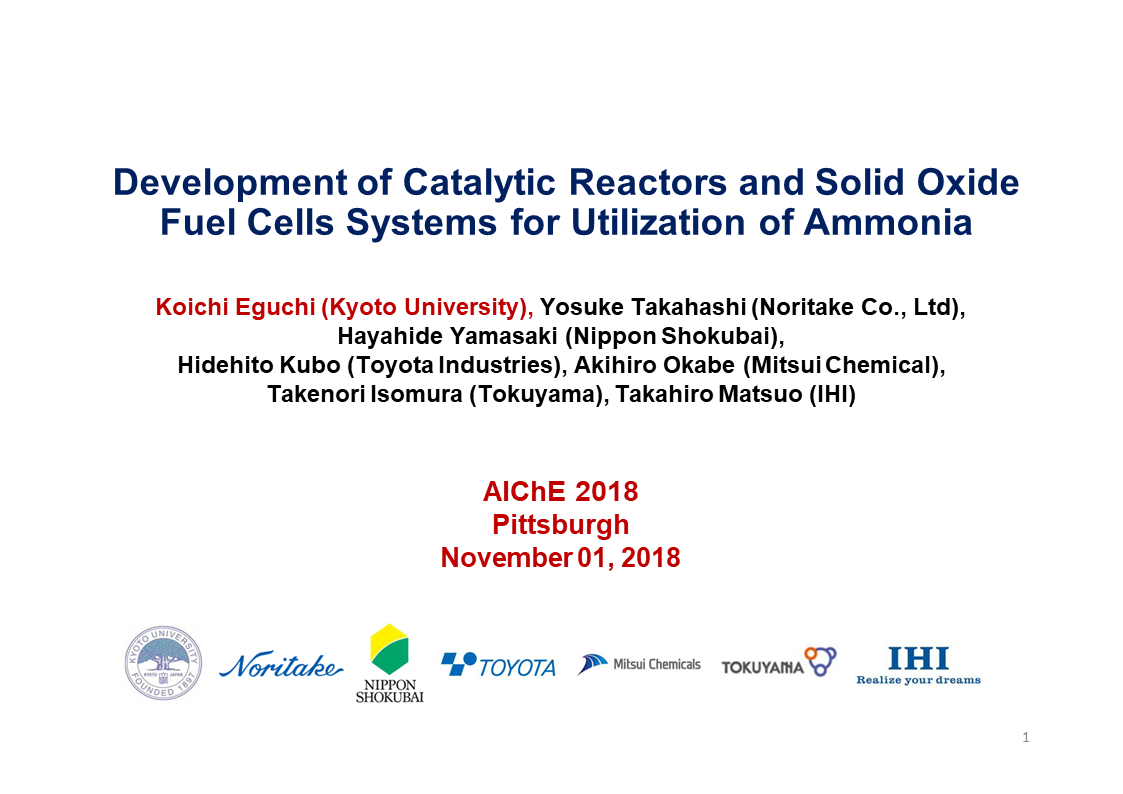 By Koichi Eguchi, Yosuke Takahashi, Takahiro Matsuo, Hayahide Yamasaki, Hidehito Kubo, Akihiro Okabe and Takenori Isomura on October 31, 2018
Hydrogen is the primary fuel source for fuel cells. However, the low volume density and difficulty in storage and transportation are major obstacles for the practical utilization. Among various hydrogen carriers, ammonia is one of the promising candidates because of its high hydrogen density and boiling point and ease in liquefaction and transportation. The reaction temperature of ammonia cracking to nitrogen and hydrogen, being about 600°C or higher, is close to the operating temperature of solid oxide fuel cells (SOFCs). The integration of these two devices is beneficial in terms of heat and energy managements and will lead to the… 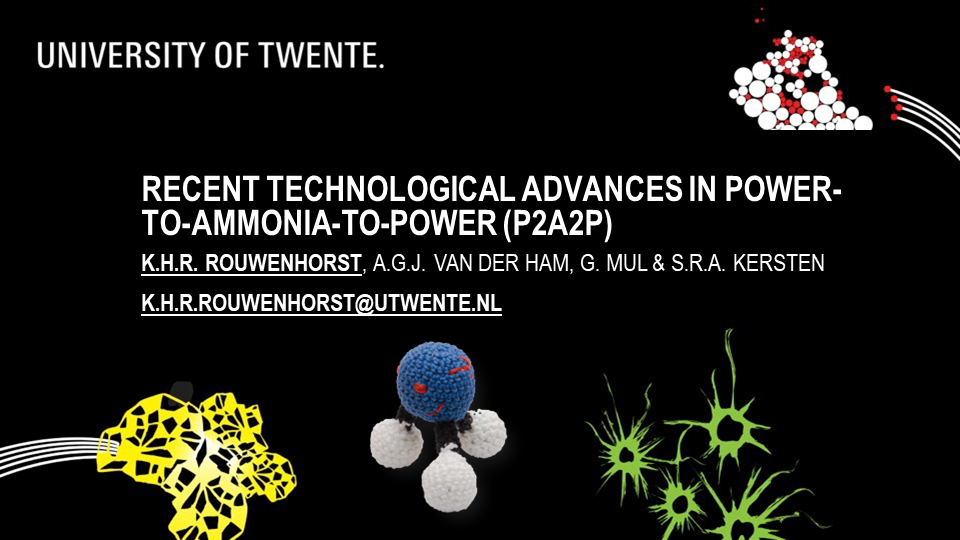 By Kevin Rouwenhorst, Louis van der Ham, Guido Mul and Sascha Kersten on October 31, 2018
A carbon-free, circular economy is required to decrease greenhouse gas emissions. A commonly named alternative to the carbon-based economy is the hydrogen economy. However, storing and transporting hydrogen is difficult. Therefore, the ammonia economy is proposed. Ammonia (NH3) is a carbon-free hydrogen carrier, which can mediate the hydrogen economy. Especially for long-term storage (above 1 day), ammonia is more economically stored than hydrogen. Transportation costs are greatly reduced by adopting a decentralized energy economy. Furthermore, political-economic factors influence energy prices less in a decentralized energy economy. With small-scale ammonia production gaining momentum, business models for the decentralized ammonia economy are… 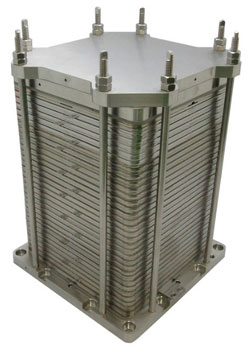 By Trevor Brown on October 25, 2018
In the last 12 months ... IHI Corporation tested its 1 kW ammonia-fueled solid oxide fuel cell (SOFC) in Japan; Project Alkammonia concluded its work on cracked-ammonia-fed alkaline fuel cells (AFC) in the EU; the University of Delaware's project for low-temperature direct ammonia fuel cells (DAFC) continues with funding from the US Department of Energy's ARPA-E; and, in Israel, GenCell launched its commercial 4 kW ammonia-fed AFC with field demonstrations at up to 800 locations across Kenya.

By Trevor Brown on October 04, 2018
I wrote earlier today about a new literature review on "Ammonia for Power," published in November 2018. As a companion piece to that article, I'd like to highlight another open-access literature review, this one published a few years before we launched Ammonia Energy, which focuses completely on the (perhaps unexpectedly) broad subject of direct ammonia fuel cells. The mini-review, "Ammonia as a suitable fuel for fuel cells," was published in the August 2014 edition of Frontiers in Energy Research, written by Rong Lan and Shanwen Tao of the University of Strathclyde in the UK.